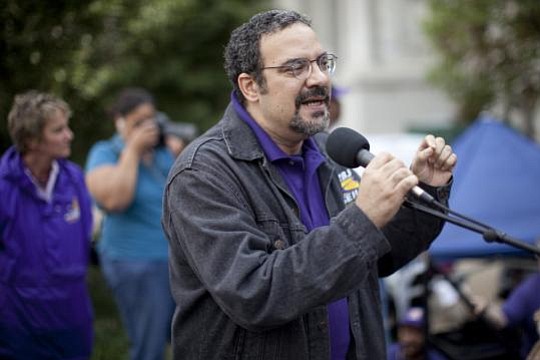 In a statement, 32BJ officials said that Figueroa’s loss is devastating because how hard he worked on behalf of his members’ well-being.

“In his many years of service to our union, to the labor movement, and to our communities, he consistently joined together a clear vision about the empowerment of working people with compassion and energy,” read 32BJ’s statement. “We extend our deepest condolences to his wife Deirdre, his children Eric and Elena, and the rest of his family, as well as to all those in our 32BJ family and beyond who forged strong bonds of camaraderie with Héctor over the years.”

As head of the largest property service workers union in the country, Figueroa helped bring 32BJ back to the forefront of organized labor and used their considerable power to influence politics in the five boroughs. New York State United Teachers President Andy Pallotta said that Figueroa represented the forgotten or disrespected New Yorkers.

“A true champion of the working class, Hector fought tirelessly to ensure hardworking New Yorkers were able to achieve a better life for themselves and their families,” stated Pallotta. “His work to empower New Yorkers, particularly immigrant communities, in the political arena was critical in shaping major debates and ultimately policies.”

Figueroa was born in Ponce, Puerto Rico to parents who were teachers. He moved to the Bronx in the early 1980’s studied economics in college through a grant. His labor career saw him work with what’s now known as Workers United and eventually SEIU’s Justice for Janitors campaign. Figueroa also worked as SEIU’s Organizing Director for Puerto Rico and helped teachers win collective bargaining rights. He was elected president of 32BJ in 2012.

The day before he died, Figueroa blasted President Donald Trump’s administration for planned ICE raids in major cities. He criticized the anti-immigration rhetoric and action as inhumane.

“No matter their status, immigrants are terrified. As one of the largest majority-immigrant unions in the country, our union stands besides all those across this country who have been subject to demonization and mistreatment under the Trump administration,” stated Figueroa. “We raise our voice now to call on the President to cancel these raids, which will only tear apart communities and workplaces, further stress an inhumane detention system, and bring untold suffering to women, men and children.”

Elected officials, real and potential, chimed in on Figueroa’s legacy.

"Héctor was one of the most driven, effective, and influential labor leaders in our city, and perhaps in the country,” stated New York City Public Advocate Jumaane Williams. “In an era when union membership has been on the decline, he dramatically expanded the scope, size, and reach of 32BJ. In an era of attacks on organized labor on the federal level, he was a stalwart defender of unions and their membership here in New York City. In an era when people are overworked and undervalued, he was a tireless fighter for expansions of their rights and protections.”

Hector Figueroa was an incredible leader, not just for the working folks of 32BJ SEIU, but for working people across New York and the country,” stated Queens District Attorney Candidate Tiffany Caban/ “Hector stood up for workers seeking justice on the job. He fought for our immigrant families, for criminal justice reform, for Puerto Rico, for strengthening our democracy – and so much more. He understood that fighting for justice and against inequity is the responsibility of all us.”

Figueroa is survived by his wife, Deirdre, and his children, Eric and Elena