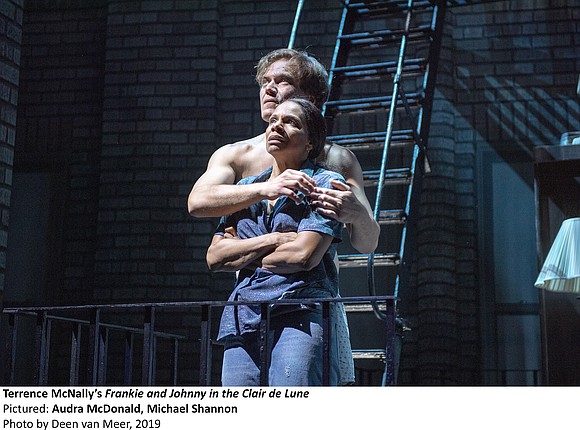 It is not often that a Broadway play starts off with two actors, the only cast members, having sex on a darkened stage—sex complete with total nudity, bed shaking, and sounds of ecstasy and satisfaction—and having those actors be six-time Tony Award winner Audra McDonald and Tony nominee, Drama Desk and Outer Critic Circle winner Michael Shannon. But that is exactly what occurs in the revival of Terrence McNally’s “Frankie & Johnny in the Clair de Lune,” playing at the Broadhurst Theatre on W. 44th Street. The sexual opening lasts for a little while and when the lights come on, if you thought they had something on under those sheets, you soon find out that they definitely did not.

McDonald is Frankie, a waitress at a restaurant and Shannon is Johnny, a short-order cook at the same establishment, and they are having sex at her apartment during the course of their first date. Some very intense dialogue about relationships, in which the focus is that Johnny wants a relationship and Frankie thinks he’s going too fast, follows the very intense sex.

What McNally lets the audience know through these very powerfully developed characters, who have very distinct personalities, is that human relationships are very fragile. On the one hand you have Frankie, who has been hurt in the past and has her guard up against anyone who wants to think of commitment, especially someone who says “I love you, I want to marry you and have kids with you” on their first date. Then you have Johnny who has had a very rough life full of instability, and when he decides he has found his soul mate will stop at nothing and put his heart out there and fight with every ounce of his being to get what he wants.

Although this is an interracial couple that doesn’t really matter. While Frankie is Black and Johnny white, all one really sees are two people trying to find their way in the world. Watching this play, which has a lot of humor, can also be very sobering as one realizes how precious it is to find your soul mate and connect with that person.

McNally brilliantly creates these characters and gives them so many layers. You see what’s on the surface and you watch as they slowly reveal what scars, fear, disappointment and stress lie underneath the facades.

McDonald is dynamite! She shows the frustration, insecurity, anger, and the sense of feeling trapped that many people feel when trying to deal with relationships and taking a hard look at their inner selves, especially when forced to do so. Shannon is sensational! He plays Johnny with a crazy—at times dirty—bold, honesty. He talks a lot and gives shocking, uncomfortable compliments, but is also a character who is needy, sensitive and determined. McDonald and Shannon sizzle in this sultry, romantic drama.

The poignant direction by Arin Arbus enables these acting heavyweights to take this production to new heights. By the end of the play you’ll have gained a new appreciation for understanding your life partner. You also realize that nothing about relationships is black and white or cut and dry. Finding love can sometimes give you a hard way to go. “Frankie & Johnny in the Clair de Lune” has detailed scenic design by Riccardo Hernandez, costume design by Emily Rebholz, lighting design by Natasha Katz and sound design by Nevin Steinberg.

“Frankie And Johnny in the Clair de Lune” plays through July 28. For more info, visit www.frankieandjohnnybroadway.com.