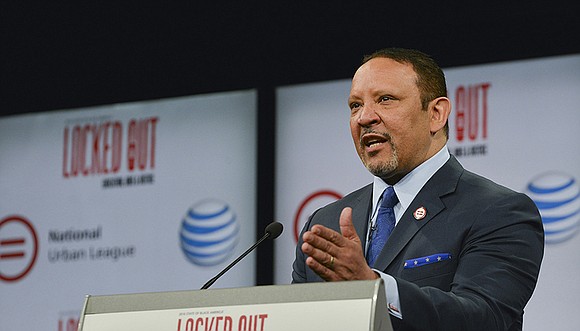 Marc Morial, the president and CEO of the National Urban League (Freddie Allen/AMG/NNPA

The $270 million project, unveiled by Cuomo, will increase the city’s affordable housing stock by approximately 170 units. It also supports the governor’s $20 billion plan to fight homelessness and create affordable housing opportunities for residents of New York City. Additionally, the land transfer will allow for below-market and rent-free space for local not-for-profits, including One Hundred Black Men, Inc. and Jazzmobile.

“Harlem has a rich history and culture that should be celebrated, protected and enhanced for future generations,” Cuomo said. “By signing this measure into law, we will help preserve Harlem’s history, create more affordable housing and provide a home for not-for-profit and civic organizations like the National Urban League and 100 Black Men which do important work every day for communities of color across New York.”

The National Urban League was founded in 1910 by Ruth Standish Baldwin and Dr. George Edmond Hayes. The organization was founded on the basis of protecting colored industrial workers, colored women and conditions among colored people in general. The nonpartisan civil rights organization advocates on the behalf of African-Americans and against racial discrimintation.

“We’re not just any civil rights organization. We help people find employment, help kids apply for schools and help families purchase homes,” said Marc Morial, president of the National Urban League. “Making sure there is access to voting rights, health care, the racial wealth and inequality gap are some of the things that we address here.”

The proposed headquarters on Harlem’s historic 125th Street will be a commanding post, overseeing 90 cities in more than 30 states. The nearly nine year plan will incorporate an affordable housing facility, which aligns with city and state leasing mandates, and a museum.

“We’ve been working on this for a while now and we’ve been working hard,” said Morial. “The facility retains the National Urban League and jobs. This project will have retail spaces and a civil rights museum, the first of its kind.”

The civil rights group was approached by several cities to be relocated out of New York. Both Senator Brian A. Benjamin and Assembly Member Inez E. Dickins expressed their gratitude in the Senate to the National Urban League for supporting low and middle income families.

Bringing the National Urban League back to Harlem was not an easy task. Having low income affordable housing, civil rights museum and retail spaces are some of the ways Morial feels the organization is improving its motive to not only preserve African-American history, but also to spread the importance of African-American history.

“Given the city’s tremendous contribution to America, it’s sad to see there isn’t a civil rights museum in New York City,” said Morial. “This is not just to highlight civil rights, but also the role the North played as well. So why not open it in one of the most historic neighborhoods in the country, and that’s Harlem.”