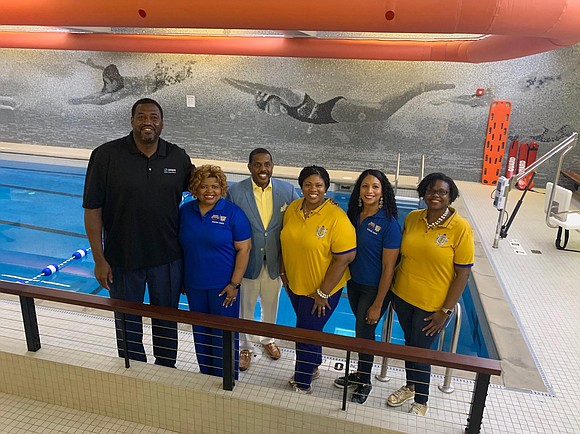 On Saturday, June 22, Brooklyn youth of all ages learned the basics of water safety at the Swim 1922 Clinic held at the Boys & Girls Club at Thomas S. Murphy Clubhouse in Brooklyn, New York. The clinic, led by 2004 Olympic silver medalist Maritza McClendon, was put on thanks to a partnership between State Senator Kevin Parker, USA Swimming, Sigma Gamma Rho Sorority, Inc., a member of the National Pan-Hellenic Council and one of the oldest historically African-American sororities. The Swim 1922 initiative is the first partnership of its kind with the intent to increase swim participation and decrease drowning rates in the African-American community. Sigma Gamma Rho members that did not know how to swim, have since begun taking swimming lessons after learning that drowning is the second-leading cause of death in the United States and have pledged to encourage others to learn to swim.

“It was an honor to have Olympic silver medalist Maritza McClendon in my district to teach constituents of all ages the importance of water safety,” Parker said. “I thank the members of Sigma Gamma Rho for partnering with my office and making this opportunity possible. I look forward to working alongside USA Swim, Sigma Gamma Rho and the Thomas S. Murphy Clubhouse of Madison Square Boys & Girls Club to expand this program and create more opportunity for children of color to learn how to swim and understand the importance of water safety at an early age.”

“Swimming is the only sport that can save lives and we continue to partner with USA Swimming to educate and inspire children and families to learn about water safety,” said Deborah Catchings-Smith, international president of Sigma Gamma Rho who was also in attendance at the event. “We are honored to have the support of New York State Senator Kevin Parker in bringing swimming education to the New York Brooklyn and Queens communities.  Sigma Gamma Rho is proud to work with USA Swimming and New York State Senator Parker to tackle drowning rates in the African-American community and other communities of color, and we’re so happy to have Olympic silver medalist Maritza McClendon here to help show the community that they can achieve all of their dreams.”

According to a 2017 study conducted by the University of Memphis and University of Nevada–Las Vegas, 64 percent of African-American, 45 percent of Hispanic/Latino and 40 percent of Caucasian children have little to no swimming ability. African-American children drown at a rate nearly three times higher than their Caucasian peers and drowning is the second leading cause of childhood unintentional death for children under the age of 14. Formal swimming lessons can reduce the likelihood of childhood drowning by 88 percent.

“It’s important to spread awareness of the importance to learn to swim, but also to make it a fun experience to learn and be inspired by an Olympic swimmer,” McClendon said. “It’s an absolute honor to be able to share my love for the sport of swimming and the importance of this life-saving skill. I’ve looked forward to seeing all the smiling faces and I hope everyone walks away with all the tools they need to be water safe as a family this summer!”

Before getting in the water, attendees had the opportunity to hear more about McClendon’s Olympic journey as the first African-American athlete to compete in swimming at the Olympic Games. McClendon has also been a member of the sorority since 2012.

During the event Parker pledged his commitment to growing swimming education and water safety throughout his constituents and all communities of color.

All Swim 1922 clinics are put on free of charge to all participants and Sigma Gamma Rho sorority members.