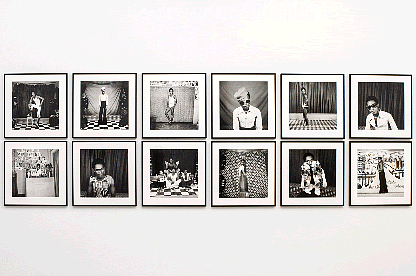 Yossi Milo Gallery is hosting African Spirits, a group exhibition of photographic works taken in and out of the studio tracing the iconic visual legacy of studio portraiture from mid-20th century Africa on contemporary art. The exhibit is on view now through Friday, Aug. 23.

From the time of its introduction to the continent, portrait photography has remained a central part of African photographic history. By the early 1900s, practitioners born in England and France had established permanent studios in most West African capitals. A generation of African apprentices-cum-entrepreneurs quickly took to the new technology, opening their own spaces to meet the growing demand for photographs in daily life. By the 1950s, the widespread proliferation of photography studios and rapid cultural adoption of the medium by photographers and patrons alike had set the stage for the outpouring of artistic innovation that followed in the post-independence era.

In African Spirits, images from the 1950s through 1980s will be on view by celebrated masters from West Africa’s “golden era” of studio photography, including Samuel Fosso (Cameroonian, b. 1962), Seydou Keïta (Malian, 1921 – 2001), J. D. ‘Okhai Ojeikere (Nigerian, 1930–2014), Malick Sidibé (Malian, 1935 – 2016) and Sanlé Sory (Burkinabe, b.1943). From Cameroon to Senegal and from Mali to Gabon, as many West African countries entered eras of independence and self-governance, photographers were forming new aesthetic vocabularies of pose and persona, ranging from images deliberately staged against painted backdrops and self-portraits with props, to snapshots of partygoers performing the latest dances to new forms of music. Captured in the selection of vintage and modern prints made from the artists’ original negatives, a natural hopefulness is witnessed of a generation of youth for whom music newly exported from America such as Soul, Rock and early R&B, new fashions such as platforms and bell-bottoms, and new technologies such as battery-powered record players were wielded in front of the camera as both signs and catalysts of change. As Sanlé Sory states of his Volta Photo studio: “People were excited about the possibilities independence offered and played with new identities in the studio.”

Contemporary works in the exhibition build upon the conventions made during the 1950s through 1980s to address present-day audiences and concerns. For example, the importance of tying oneself to a global consumer culture can be observed in both the joyful travel-themed portraits by Sanlé Sory and in present-day works by artist Hassan Hajjaj (Moroccan, b. 1961) that demonstrate the international nature of popular culture, fashion and music. Queer-identified artists such as Kyle Meyer (American, b. 1985) extend the revolutionary capacity of the photographer’s studio to assert the independence, relevance and power of subjects facing persecution. Meanwhile, works by Paul Mpagi Sepuya (American, b. 1982) are animated by inquiries into the voyeuristic nature of portraiture itself.

The exhibition’s title is drawn from the series African Spirits by Samuel Fosso, in which the artist photographs himself in various guises, paying tribute to past cultural and political figureheads. Likewise, the present exhibition displays how the energies of groundbreaking forebears are revived and reinterpreted by contemporary generations of artists exploring novel ways of capturing their subjects and themselves. The genre of portraiture and space of the studio are revealed as important and vital laboratories for artists to experiment with and express evolving notions of self and society. Then, as now, young generations remain optimistic and set their camera lenses on a brighter future, whether by capturing their vibrant youth culture or holding power accountable.