Another form of global warming by Barry Harris and crew 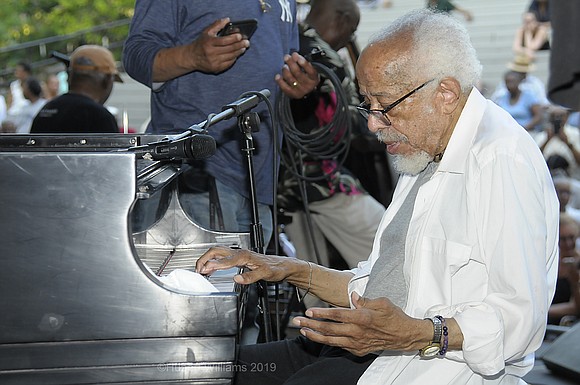 When the venerable pianist and composer Barry Harris spreads out a carpet of chords, signaling the tune “Billie’s Bounce,” his bandmates know intuitively how to shape their solos. First into the foray of the master’s lead on this blistering hot Friday evening at Marcus Garvey Park was tenor saxophonist Gene Gee, and his big sound was only exceeded by his clever toying with the familiar melody, so much so that you could almost hear the lyrics Eddie Jefferson invested in the composition.

Gee worked the changes, leaving just enough space for trumpeter Bruce Harris to tease out some memorable lines. His creative sound, his way of getting in and out of the melody must have sparked some poignant memories for the ageless pianist, now on the precipice of his 90th year.

Patience Higgins, a tenor saxophonist who commands a huge following of fans, essayed a history of the horn as he picked up on a few licks dropped by Gee, and then keyed swiftly and sonorously into the pulse of rhythm established by Harris, bassist Calvin Hill and drummer Leroy Williams. For several minutes the group delivered a high level of funk, and each soloist found a different way to invigorate the tune and the crowd.

On “Groovin’ High” the sextet continued its intensity, and after each horn man carved his niche on the Gillespie evergreen, Harris applied his personal bebop stamp, invoking those days when as a younger performer he pushed the legendary Charlie Parker to greater musical heights.

But this was the trumpeter’s moment too, and Harris kicked the group up an exciting notch or two with his sizzling pace and intricate explosions. It was all Higgins and Gee could do to match the fever of his brilliance. In fact, the ensemble pushed the temperature up a few degrees, although cool jazz might have been a preference on these days of humid global warming and climate change.

The next sound I heard was my phone chiming and it was time for me to go on the air with Imhotep Gary Byrd. You might say I went from Bird to Byrd, and that commitment robbed me of catching more of the Jazzmobile concert—which now, since Jazzmobile 55 has its Summerfest underway, there will be ample opportunities to groove again with the gray eminence and his sidemen.