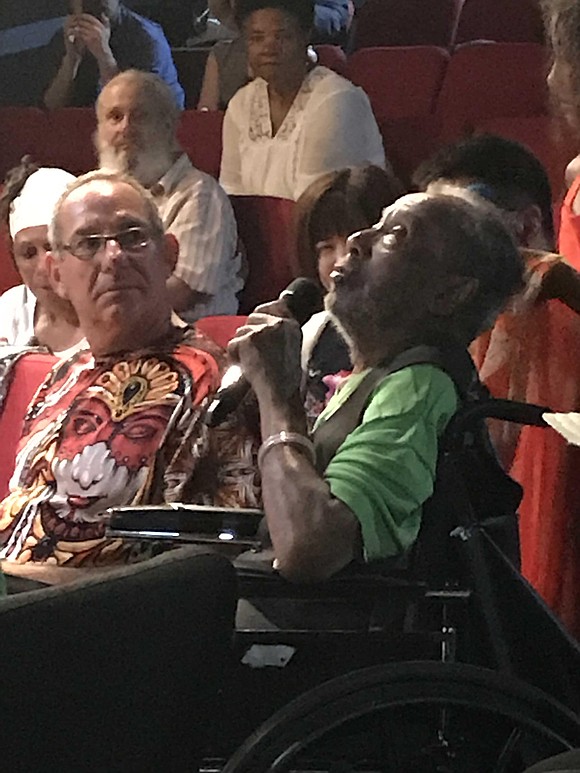 These opening weeks for Jazzmobile are a testimony to why the nonprofit organization has maintained its reputation as the best jazz Summerfest in the Big Apple.

The Marc Cary-Ben Williams Project took Minton’s Playhouse to a higher ground that they haven’t visited since Thelonious Monk and Charlie Parker were part of the historic jazz club’s house band in the 1940s. Cary, a member of that Washington, D.C. Chuck Brown go-go booty-shakin’ funk, joined with bassist Ben Williams and other DC cats for a go-go-Harlem shakedown. The large ensemble enlisted a non-quiet policy for the night that included dancing and lasted until after 11 p.m. The Marc Cary Harlem Sessions will convene every third Thursday at Jazzmobile’s Residency @ Minton’s.

Reggie Workman is one of the premier bassists in jazz. His creativity bridges the jazz genre gap between mainstream jazz and avant-garde. He appeared on recordings for Abbey Lincoln, Lee Morgan, Max Roach, Archie Shepp and Wayne Shorter. On the avant-garde he worked with Marilyn Crispell, Butch Morris, David Murray, Sam Rivers and Cecil Taylor. Workman’s ability to play various styles of music led to him becoming a mainstay for Blue Note Records (studio recording sessions) during the 1960s and early 1970s.

He continues to have a long-standing collaborative performing group with Trio 3 featuring saxophonist Oliver Lake and drummer Andrew Cyrille. He also is a professor at the New School’s College of Performing Arts in New York City, where he has been teaching since 1987.

Dr. Taylor, pianist, composer and educator, co-founded Jazzmobile in 1964 with philanthropist and arts administrator, Daphne Anstein. Dr. Taylor originally lived in the Riverton at 2265 Fifth Avenue, it is where he wrote his jazz standard “I Wish I Knew How It Would Feel To Be Free.” Mixon noted, “It is a pleasure to pay tribute to the legendary Dr. Taylor, who has been inspirational mentor to me and so many others.”

The stirring saxophonist and flutist T.K. Blue will join Jazzmobile on July 31 at Grant’s Tomb (Riverside Drive & West 122nd Street), 7 p.m.-8:30 p.m. Blue has played from the Lenox Lounge to West Africa. He was a long-standing member of Randy Weston’s African Rhythms group until his death. Blue will surely bring the roots of Africa and Harlem blues to the stage.

Kassa Overall is a music explorer; a drummer, composer, electronics user and producer, constantly working on various projects in real time. He could be looping sounds, playing in hip-hop mode or like an inventor experimenting with electronic percussion sounds or playing music just out of the jazz zone. His most recent album on vinyl “Go Get Ice Cream and Listen to Jazz” “is one of the few genuine-sounding, full-scope amalgams of contemporary hip-hop and jazz to surface in recent years,” said Giovanni Russonello in The New York Times.

On July 27 Overall’s Blue Swamini will feature harpist Brandee Younger, vibraphonist Joel Ross and bassist Endea Owenson during a performance in Brooklyn at Industry City (238 36th Street). This is a diverse young group in their 20s and 30s whose only intent is introducing listeners to music without boundaries.

Overall was visiting his parents in Colorado during our recent telephone interview as he discussed the group’s upcoming gig in Brooklyn. He explained the group’s name Blue Swamini actually comes from a composition by pianist and composer Geri Allen which she dedicated to harpist Alice Coltrane, who was a practicing Swamini. The name is from the Hindu religion reflecting a mystic force that we are all one. “Our name draws