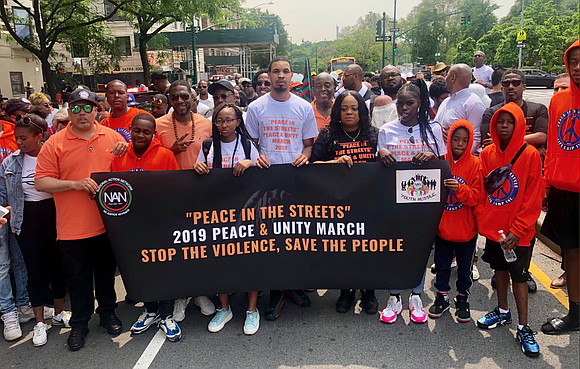 June is Gun Violence Awareness Month and activists around the city continue their annual call out for a cease fire, even in the wake of recent shootings in the city in the backdrop.

News broke Wednesday afternoon, June 5, that a 7-year-old boy was grazed in the knee when shots rang out in the Bronx. Reports indicate that the boy and his grandmother were talking in Mott Haven in the courtyard of NYCHA’s Mill Brook Houses when a suspected man in his mid-20s open fired.

No arrests have been made and the boy was taken to the hospital and is expected to survive.

On Sunday, June 2, reports indicate that a man was found shot in the head behind the Linden Plaza Apartment complex in East New York, Brooklyn. The man, who is reportedly 29-years-old, has not been identified and police have not made any arrests.

Also in Brooklyn, police are looking for four young men wanted for their suspected involvement in the shooting of a man in Bed-Stuy. Reports indicate the men came from behind the victim while he was walking on Franklin Avenue before shooting him in the back.

The victim remains in the hospital in stable condition. Police have not made any arrests but have released surveillance footage of the suspects.

While the city experienced its first set of shootings over the first few days of June, they are sticking to their commitment and the streets to stop the bloodshed.

On June 1, the Chris S. Owens Foundation kicked off Gun Violence Awareness Month with a rally. This year marks 10 years since Owen’s murder when he was shot and killed by a stray bullet in Harlem on April 26, 2009. His father, Chris Foye, started the foundation to honor his son and seek community-based solutions for safer streets.

“Like any other social issue, gun violence affects millions of people,” Foye said to the AmNews. “I think that Gun Violence Awareness Month brings awareness to people who didn’t know about the multiple shooting that happened in urban communities every day.”

Foye added that the solution to eliminating violence on city streets is to take a holistic approach and get more resources.

“Gun violence is such a complex issue,” he said. “The solution has to start with education. We really have to rebrand the culture of gun violence. I’m really hoping there are no shootings this summer and that everyone can be part of the work to eradicate the problem.”

Also on Saturday, June 1, the National Action Network and several anti-violence groups kicked off Gun Violence Awareness Month with the “Peace in The Streets March.” Members of the NAN Youth Huddle, led by the Rev. Al Sharpton’s daughter Ashley Sharpton, held a prayer lie-in and march on the streets of Harlem.

Activist Robert Jackson urged people to “Join us to take action against gun violence...a call to action for peace, unity and anti-gun violence as the weather gets warmer, school is out, and the streets get busier and more dangerous, especially for the youth. This also serves as a response to the Nipsey Hussle shooting, countless shootings and acts of violence in the streets of our community, and the continuation of our anti violence efforts. We must set the tone in and to our community that we are not normalizing violence, it is NOT OKAY that so many children, men, and women have shed innocent blood and/or lost their lives in result of gun violence or senseless violence. At the march, we will share several ways to take action against gun violence throughout the month and year.”