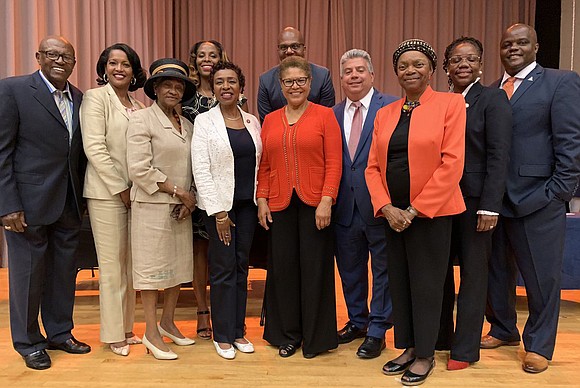 A delegation led by the December 12th Movement International Secretariat attended the Gentrification Roundtable to discuss the “ethnic cleansing of Black communities nation-wide and had the opportunity to speak with Congresswoman Karen Bass, who serves on the House of Representatives Subcommittee on Africa concerning land redistribution program in Zimbabwe and almost 20 years of U.S. economic sanctions.”

International human rights attorney Roger Wareham, of the International Secretariat, said, “Our chairperson Viola Plummer and I discussed the severe impact of the illegal sanctions on Zimbabwe that CBC members voted for in 2001 and continue to remain silent on the human rights abuses which the sanctions cause in Zimbabwe. We were in Zimbabwe observing the democratic, free and fair presidential election in 2018 with observers from around the globe. Congresswoman Bass, who serves on the Subcommittee on Africa, was part of the U.S. observer team which failed to acknowledge its fairness.”

Wareham continued, “We recently held a mass demonstration and rally in Washington, D.C. in front of the White House on African Liberation Day (May 25), demanding an end to U.S. economic sanctions on Zimbabwe and the need for the CBC to exercise its leadership on this critical issue. Congresswoman Bass assured us she is against the sanctions on Zimbabwe and would arrange a meeting with us to discuss how we can work together immediately. We will definitely make sure that happens.”

“We also want all our people to reach out to their congressional representatives to demand an end to the illegal and deadly economic sanctions now,” he concluded.