Community-based early childhood educators to de Blasio: ‘What about us?’ 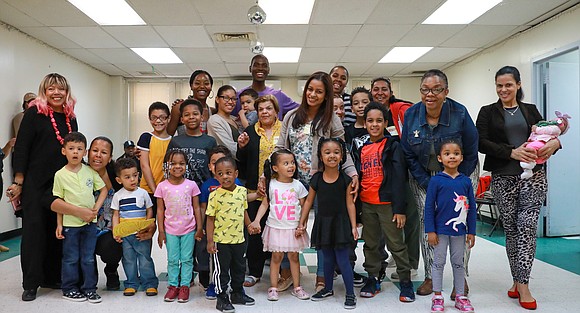 Last month, the Day Care Council of New York launched a campaign to raise awareness about community-based early childhood centers. The campaign, called Early Education, Better Care, emphasizes the financial independence that leads many women (mostly of color) to contribute to the household.

But community-based early childhood educators are fighting to be compensated equal to their public union counterparts.

According to a year-long research study by DCCNY, certified early childhood teachers make $17,168 less than teachers employed by the New York City Department of Education. The organization estimates that it would cost $83 million to bring both unionized and non-unionized certified teachers and directors who work in community-based organizations to the same salaries as their public sector peers.

“When Bill de Blasio went to Albany to get money for full day pre-K, he didn’t really look at the structure of what it would mean to the community sector,” said DCCNY Executive Director Andrea Anthony. “Universal pre-K has been around in New York City since the mid 1990s due to the efforts of Sheldon Silver. The mayor decided to do full day pre-K without thinking about the infrastructure.”

Anthony mentioned how many community-based early childhood centers are located in poor neighborhoods and in public housing and are often run by nonprofit agencies.

“His intent to provide a service to families who desperately need it was successful,” said Anthony. “He did turn around a program for 20 years from half-day to full day. And he gave a lot of opportunities to families who were paying for childcare out of pocket who no longer have to do that. But he didn’t stop to look at the existing system to figure out what it needed.”

“Our mayor was more concerned about filling seats rather than making sure he had enough providers to teach the kids,” Anthony concluded.

Council Member Mark Treyger, along with people such as Council Speaker Corey Johnson, have advanced the issue of pay parity in the City Council, which has come to a consensus in favor of standing behind CBO educators.

“The mayor’s signature program is on the brink of collapse if this not addressed,” said Treyger. “The issue is not new. If you do not work to maintain the educators who are predominately women of color, who are required to work longer days than their DOE counterparts, there will be a detrimental impact on child development.”

Treyger and Anthony have called the city out for not funding the organizations that educate the kids and noted that the turnover in teachers is high. According to Treyger and Anthony, teachers either leave the profession or move to a DOE-affiliated teaching job.

“[Teachers] identify any learning issues early so that there can be adequate support so they can move on in their academic career with as little fuss as possible,” said Treyger.

A recent survey by DCCNY in 2018 revealed that 73.5 percent of all agencies had a certified teacher vacancy in the past 12 months. Another DCCNY’s report titled “The Value of Early Childhood Educators: A Pathway Forward to Salary Parity for Community-based Organizations” was presented to administration officials and City Council members. The Council has offered their support to raise the salaries of community-based early childhood educators. Now, they’re waiting for the mayor to follow suit.

“He was only concerned with saying ‘I filled 65,000 seats,’” said Anthony. “That’s wonderful, but who is standing at the end of that classroom? It’s a certified teacher. Do you have the quality in the classroom needed? How about going with 50,000 seats and using the money for the other 15,000 seats to help pay for the salary of the teachers in the communities so they don’t leave and got to the DOE.

Treyger said the city has the money to make it happen now before it’s too late.

“We have to get this right,” said Treyger. “If these programs go down, is there space in the DOE facilities to accommodate those kids? They don’t have it.”