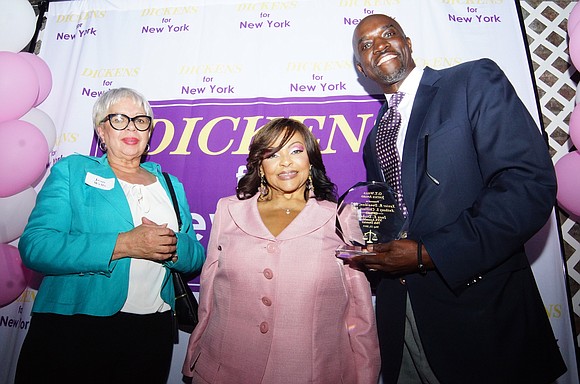 A garden party given by Assemblymember Inez E. Dickens last Saturday in Harlem was a vibrant mixture of awards celebration, banquet, schmoozing, concert and, of course, fundraising. Mirroring the various aspects of the party were the number of prominent people in attendance, including former Congressman Charles Rangel, Borough presidents Gale Brewer (Manhattan) and Eric Adams (Brooklyn), Councilmember Mark Levine, the legendary Vy Higginsen and as moderator Lloyd Williams noted, too many to be cited.

What Dickens said in her remarks was reflective of the turnout. “I am trying to represent the entire community,” she began, “I stand tall and I do not lie.” Her words were greeted with sustained applause, and before she began presenting awards she demanded that “we support our judges.”

The awardees, like the event itself, came from various sectors of the civic life. The Rev. Reginald Lee Bachus, resplendent in his green sport jacket, received the Lloyd E. Dickens Distinguished Leadership Award, named in honor of Dickens’ father. The O.T. Wells Justice Award was given to attorneys Xavier Donaldson and Anthony Chilliest.

Accepting the Lloyd E. Dickens Community Impact Award on behalf of One Hundred Black Men, Inc. of New York was its president, Michael Garner. Assemblymember Crystal Peoples-Stokes was saluted with the Key to Harlem Award.

Hovering above the ceremony was a musical ensemble from a balcony led by trumpeter Michael Lewis, where they serenaded the event with jazz tunes by Thelonious Monk and a jaunty rendition of “Feel Like Making Love” that summoned Roberta Flack and more than captured the convivial gathering below.