How will the Raptors bounce back from Game 2 loss? 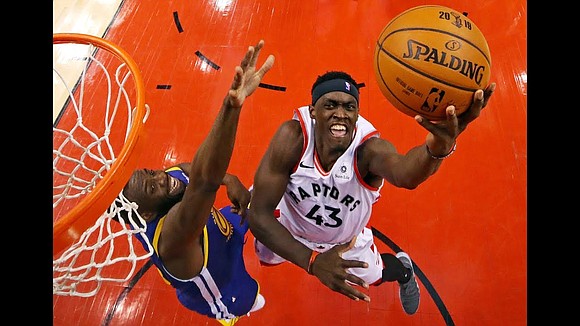 Raptors forward Pascal Siakam aspired for a better performance in Game 3 of the NBA Finals last night against the Warriors after scoring only 12 points in Game 2.

On Sunday in Game 2 of the NBA Finals, the Toronto Raptors squandered a fortuitous opportunity at home to put the Golden State Warriors into a 2-0 hole best-of-seven series.

Already playing without an injured Kevin Durant, who is still recovering from a right calf strain, the Warriors were staggering on the ropes but the Raptors were unable to put them away.

“Third quarter we didn’t play well enough,” said Raptors guard Kyle Lowry. “We missed too many shots.” Unfortunately for them, the Warriors made many of theirs, starting the period on a 18-0 run to erase a 59-54 halftime deficit and take a 88-80 lead into the fourth quarter, an advantage they would not relinquish in winning Game 2 by 109-104. But it took a gutsy three-pointer by the Warriors’ Andre Iguodala with 5.9 seconds remaining to seal it.

The game was actually lost by the Raptors late in the second quarter. Toronto, which by the eye test was seemingly outplaying the Warriors, went up 47-35 with 5:16 remaining and could have pushed the lead higher. But the Warriors’ experience and never panic mentality compelled them to do just enough and capitalize on the Raptors’ lack of killer instinct to close the gap to five by the conclusion of the quarter.

So how will the Raptors bounce back with the next two games in Oakland including Game 3 last night (Wednesday, June 5) and Game 4 tomorrow (June 7)? It starts with taking advantage of the absence of Durant and the iffy status of Klay Thompson, who sustained a left hamstring strain at 7:59 of the fourth quarter in Game 2.

Durant’s return is uncertain and it’s doubtful that Thompson will heal to the level of being one of the best two guards in the league on both ends of the court. Additionally, the Warriors’ valuable reserve Kevon Looney is out for the rest of the series with a fractured collarbone.

The injuries leave the Warriors vulnerable defensively as much as offensively. Thus, Raptors forward Pascal Siakam, who scored a career playoff high 32 points on 14-17 shooting in the Raptors’ 118-109 Game 1 victory, must be much better than he was in Game 2, when he was only 5-18 for 12 points in 41 minutes.

The Raptors also must contend with the increased role of center DeMarcus Cousin, who became a focal point of the Warriors’ offense in Game 2, registering 11 points, 10 rebounds and six assists.