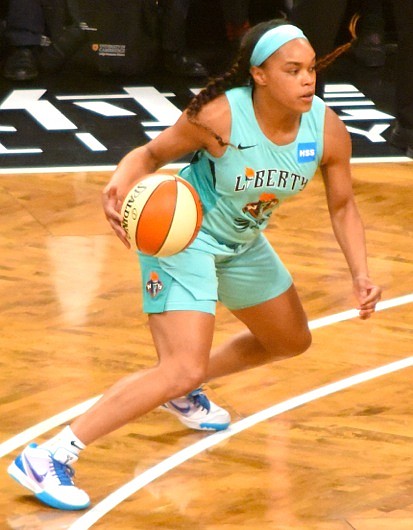 Although there are some nice things happening with the New York Liberty this season, thus far the team is missing the most crucial positive—a win. This past week, the Liberty suffered back-to-back losses, putting the team at the bottom of the WNBA standings.

The first loss came on the road as New York dropped a second game to the Indiana Fever. This one wasn’t a buzzer-beater, but a more decisive 92–77. Five Liberty players were in double figures, but the team shot just 34.7 percent from the field and 29.2 percent from three-point range.

“Energy wasn’t good enough and we didn’t hit shots,” said head coach Katie Smith. “[Indiana] hit shots and shot 60-something percent [52.3 percent for the game], so the first quarter literally was the ballgame.”

Smith said the team had worked on defense in the week following the season-opener against the Fever, but the defense was not consistent throughout the game. Also, the lack of offensive consistency is costly.

On Tuesday, the Liberty was back on home court for a daytime School Day game against the Los Angeles Sparks. With a 21-point performance, Tina Charles passed Vickie Johnson as the Liberty’s all-time leading scorer. She also grabbed 14 rebounds.

“This franchise means the world to me, so for that to happen, I would have never imagined it,” said Charles, a Queens native who grew up watching Liberty games. “I’m just grateful to be able to play in my city, New York.”

The game against Los Angeles was also another strong effort by Reshanda Gray, who had 12 points and five rebounds. “She’s always working out with Spoon [Liberty’s director of player and franchise development Teresa Weatherspoon],” said Charles of Gray. “She asks a lot of questions and pays attention to detail.”

Despite the effort, the Liberty came out on the losing end of the 78–73 game. Smith said it was the team’s best effort to date.

“I think it was a building block that we need,” said Smith. “If we do this every single night, if we compete like this, we are going to win some ballgames. That’s what we’re telling them; that we are growing. We are building and on the other end we will find ways to put that thing in the hole.”

The Liberty have three home games at the Westchester County Center over the next week. On Friday, New York takes on the Washington Mystics, on Sunday the Las Vegas Aces and on Wednesday the Minnesota Lynx.