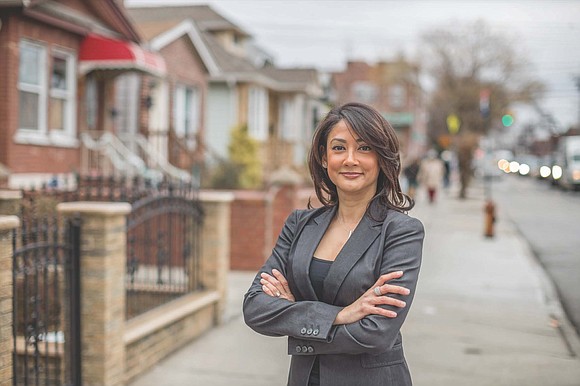 “I was asked to stay out of this race even though I’m the best qualified candidate,” said Mina Malik. “I was told to stand down.”

Malik, in fact, did not stand down, but continued her quest to become Queens district attorney by championing her accolades. “Everybody in the race is talking about criminal justice reform, but no one has actually implemented it,” she said. “All of the new initiatives being talked about, I pretty much have already done.”

The candidate field for Queens DA could almost fill a starting lineup for a baseball team. Featuring Queens Borough President Melinda Katz, New York City Council Member Rory Lancman, Public Defender Tiffany Caban, former State Supreme Court Judge Gregory Lasak, attorney general office staffer Jose Nieves and former Nassau County Assistant DA Betty Lugo, the race is about who people know, who stands out and who has the credential. Pundits see Katz, who could be seen on Sunday with a camera crew in Forest Hills walking down Austin Street right past a sign for Malik, as the favorite due to name recognition alone. The Queens County Bar Association, which consists of only white men, came under fire for naming Lasak, a white man, the most qualified candidate in their DA candidate rankings.

But Malik said that the most qualified candidate in the race is right under pundits’ noses.

“I’ve been on the defensive side as well as the prosecutors,” said Malik. “I’ve not only worked alongside police officers, I held them accountable.”

Malik has the resume for someone who wants to be a district attorney. After obtaining her bachelor’s from Bates

College and her juris doctorate from The American University Washington College of Law, her career trajectory took her from public defender in Washington, D.C. to assistant district attorney and senior district attorney in the Queens DA’s office, to a special counsel position with the late Kings Country District Attorney Ken Thompson, to executive director of the Civilian Complaint Review Board (where she handled police misconduct cases involving James Blake, Thabo Sefolosha and Eric Garner), to a lecturer on law position at Harvard, to deputy attorney general in D.C. The Elmhurst and Corona-raised Malik’s credentials are informed by her experience professionally and personally.

Malik is the product of an immigrant family with a mother who worked as a registered nurse affiliated with 1199 SEIU and a father who was a machine operator. Of Hispanic and Asian heritage, Malik said that she wants the Queens DA office to reflect the demographics of the county.

“Making sure that the office is diverse, inclusive, transparent and accountable to the people of Queens County,” said Malik. “Not prosecuting low level offenses that do nothing but collateral damage like being unable to get a job, a house, a loan, a license or sometimes an education. I want to start an integrity bureau, which will look at corruption cases with public officials and police misconduct cases.”

One of the many things Malik has championed is her assistance in the creation of a Conviction Review Unit in Brooklyn with Ken Thompson. Looked at as a model for DA’s offices nationwide, Malik wants to establish one in Queens, but is also shocked one doesn’t exist yet.

“We’re the only county in the city without a conviction review unit,” said Malik. “Anytime you’re behind Staten Island in criminal reform, you have to say ‘what’s going on here?’”

Malik wants to focus on serious crimes, reduce prosecution of low-level offenses, increase transparency, confront police misconduct and end criminalization of the poor. She related, “My managerial experience included running the day to day operations at Ken Thompson’s office. I was charged with revamping the CCRB and making sure the agency improves. These are all actions that should be taken into account, and I think I should be the next district attorney.”