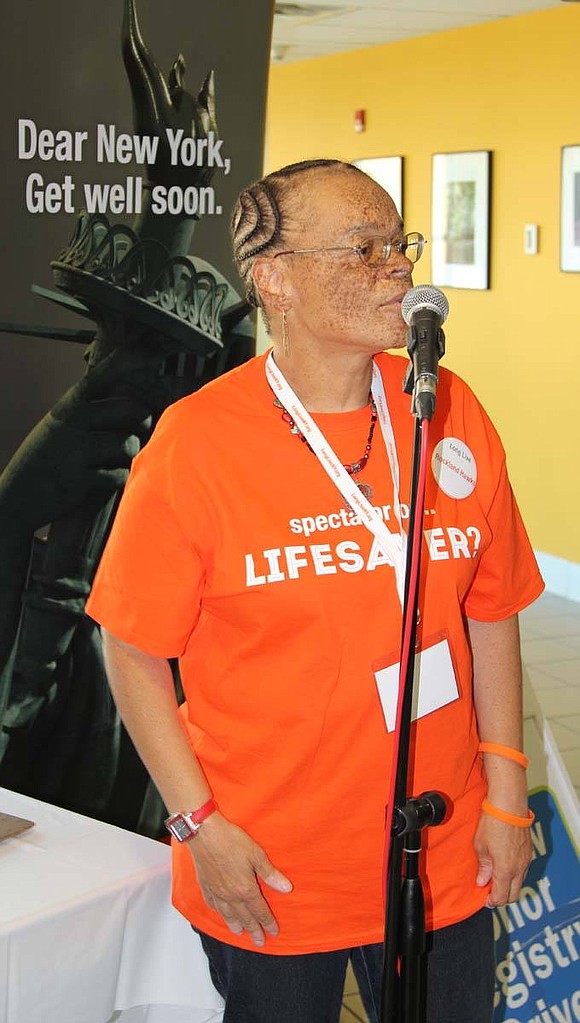 Roxanne Watson of Nanuet, N.Y. spent the last seven years trying to increase the number of people registered for organ donation. She recently exceeded her goal of registering over 11,000.

A recipient of a heart transplant herself in 2010, Watson currently volunteers with the WomenHeart, Donate Life Rockland, LiveOnNY and is an ambassador for the American Heart Association. She’s been an advocate for people to become organ donors, especially in the Black community.

Her story caught the eye of Oprah Winfrey, who asked her to come on her talk show to discuss the experience. Winfrey surprised Watson on the show by allowing her to meet the family of the young man who donated his heart to her.

According to the U.S. Department of Health and Human Services, African-Americans make up the largest group of minorities in need of an organ transplant. While 29.8 percent of the total candidates currently waiting for transplants are Black American, they comprised 13.5 percent of organ donors.

“The year that I got my transplant, 93,000 people died in New York and 10,000 people were waiting for an organ transplant,” Watson said. “Once I got on the list, I waited two years for a heart. I would be dead if I didn’t get my donation.”

Watson vowed if she lived through her heart transplant, she would dedicate her time spreading the word to the masses about the importance of organ donation. People can sign up in several ways including signing up at the New York Organ Donor Registry, registering when renewing a driver’s license or state ID, or including organ donation in health care proxy. Up to eight organs can be donated from one body.

“Many people that I speak to say they weren’t asked to be an organ donor,” Watson said. “It’s not that they don’t want to, they were just never asked the question.”

With a concern over the low number of Black donors, Watson speaks at several hospitals, health facilities and community events in the Bronx, Harlem and Brooklyn. Historical concerns over racism in the medical field in the United States makes many Blacks reluctant to become donors.

“There are lots of reasons why people don’t want to donate their organs,” she said. “Sometimes it’s cultural or religious reasons. People are often skeptical or there is a distrust of the medical community.”

With facts and figures in hand, Watson does her best to ensure that organ donation is safe, secure and is life-saving. In 2013, she was instrumental in the passage of “Lauren’s Law” that requires DMV employees to ask New Yorkers if they want to be organ donors. The law is named after Lauren Shields of Stony Point, in Rockland County who received a heart transplant at age 9.

“I’m not giving up,” Watson said. “I’ve been all over the country and I want more of us to be involved. Age doesn’t matter, health doesn’t matter and one body can save a lot of people.”

So, what’s Watson’s next goal? She plans to beat her previous record of registering 11,000 organ donors and increase that number to 15,000.