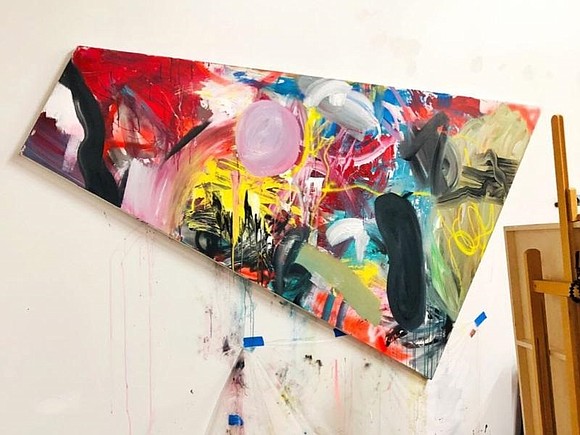 Art by ThankYouX (aka Ryan Wilson)

Los Angeles artist ThankYouX (aka Ryan Wilson) will debut his solo exhibition at the BlackBook Presents gallery in Dumbo, Brooklyn Thursday, June 20, 2019. ThankYouX began his artistic journey on the streets of Los Angeles, spray-painting stencils in homage to Andy Warhol. Those stencils were his initial calling card; the work gained him a significant cult celeb.

As his notoriety grew, the scope of his expression evolved to contemporary abstract images that stand in striking contrast to the more conventional graffiti-inspired street-art paradigm. ThankYouX went on to exhibit paintings and sculptures in London, Los Angeles, Miami, New York and Hong Kong.

Today, his artwork is highly recognized by the art world. His mixed media cube paintings and large-scale abstract work are inspirational. This “Movement” series is the best.

“The cube patterns had me feeling that rush again,” stated Wilson enthusiastically. “Change is good, it was fresh—it was important for me to challenge myself, and so I moved on from the image based focus point.”

Notably, ThankYouX was the official artist of the 2016 Global Citizen music festival in New York (curated by Coldplay’s Chris Martin). He recently completed an artist residency at Soho House in West Hollywood in 2018.

In 2019, the artist introduces his work to entirely new audiences. Indeed, he’ll be in Biarritz, France June 12 for his collaboration with Indian Motorcycles, along with fellow artists including Risk and D Face. “I have done a few group shows in New York,” he explained, “and I felt like now was the time to do a proper show. So I was thrilled when BlackBook called about the solo exhibition; they really listened to my vision and were just as excited as I was to do it.”

ThankYouX is looking forward to his next solo exhibition and reception, on June 20, 2019, from 6 p.m. to 9 p.m. at the BlackBook Presents gallery in Dumbo, Brooklyn, New York.