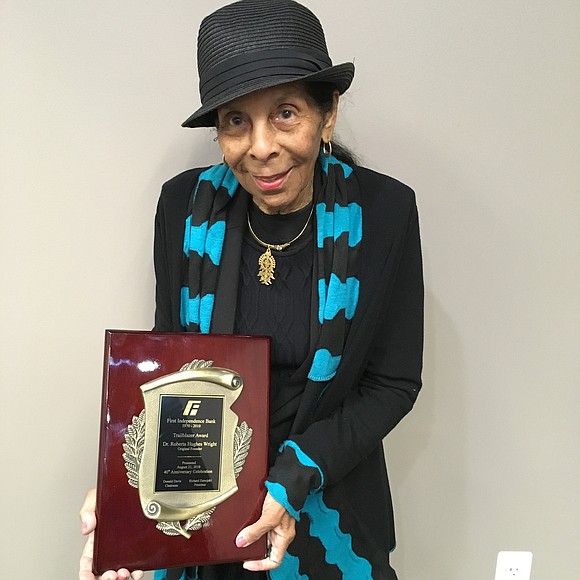 It may be understandable, if not acceptable, that Dr. Roberta Hughes Wright often languished in the shadows of her famous husband, Dr. Charles H. Wright. But Roberta illuminated those shadows with her own distinguished record of accomplishments, the least of which was as an esteemed educator and attorney.

Even so, she was usually noted as Dr. Wright’s tireless companion and later as the first lady of the Charles H. Wright Museum of African American History. She was born Roberta V. Greenidge on April 17, 1922, in Detroit and attended Northern High School. Successively, she earned a Bachelor of Science degree, a Master’s degree, and a Juris Doctor degree from Wayne State University.

At the University of Michigan, Roberta received her Doctor of Philosophy degree in behavioral sciences in education, after which she began her teaching career in the Detroit Public School system, working as well as a school social worker.

In his foreword to her in his book about her husband, titled “Charles H. Wright, M.D.: The Man and the Museum,” Arthur Jefferson observed that she held a number of important positions in her very active career, including director of the City of Detroit Commission on Children & Youth; a faculty member at Lawrence Institute of Technology; vice president of Academic Affairs at Shaw College; and a founder and 10-year member of the Board of Directors of the First Independence National Bank of Detroit.

Roberta said the bank was created out of necessity as a result of the racial climate of that time and how it affected the African-American community in every way conceivable. “The mood just after the ’67 riots was volatile. It was difficult for us in many ways. We all just wanted to be able to thrive. Open businesses, buy homes and take care of our families,” she said. “We didn’t know how to start a bank, but we knew it was what we had to do.” In 1970, First Independence Bank was founded and was one of 28 Black-owned banks in the United States.


Besides her books on her husband, Roberta authored a dozen other books, including an autobiography, “Reflections, My Life and Lay Down Body,” and an exposition on the history and importance of Black American cemeteries. In “Reflections,” Roberta takes readers on a journey from having a radiologist father to being the wife of a doctor and activist. Named after her father, Robert Isaac Greenidge, Roberta wrote that he was born in British Guiana in 1888 and migrated to Battle Creek, Mich., in 1909. She recounts his earlier affiliation with Seventh Day Adventists.

Racial hostility and discrimination were impregnable obstacles, but Dr. Greenidge persevered and by the 1930s established the Eastside Medical Laboratory on Beaubien Street to serve as a training and service center for Black physicians. Moreover, Roberta said of her father, he helped create Great Lakes Mutual Insurance Company, Victory Loan Association, skills and endeavors he passed on to his daughter.

Her recitation of her father’s trials and tribulations is often interwoven with Dr. Wright’s ascendance. Here is what she wrote about her husband and the founding of the museum. “During the decade of the ’60s, all around the country African-Americans were rediscovering and re-examining their culture,” she noted. “After visiting a memorial to Danish World War I heroes, Dr. Wright and a small band of ‘true believers’ opened, in 1965, the International Afro-American Museum in three row houses on West Grand Boulevard…In the first few months, more than 25,000 people visited the museum for lessons in African-American history and culture.