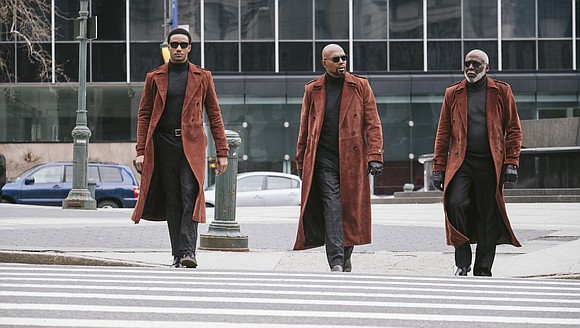 Jessie T. Usher plays J.J., aka John Shaft Jr., a cybersecurity expert with a degree from MIT. To uncover the truth behind his best friend’s untimely death, he needs an education only his dad—Shaft (Samuel L. Jackson) can provide. Now a hard-nosed detective with his offices and his home located inside the historic New York Amsterdam News building, the always locked-and-loaded Shaft agrees to help his progeny navigate Harlem’s heroin-infested underbelly.

And while J.J.’s own FBI analyst’s badge may clash with his dad’s way of getting the truth, there’s no denying family. Besides, Shaft’s got an agenda of his own, and a score to settle that’s professional and personal.

The film was produced by John Davis (“Game Night,” “Joy”) under his Davis Entertainment banner. Kenya Barris (“Girls Trip,” TV’s “Black-ish”) and Alex Barnow (TV’s “The Goldbergs”) wrote the screenplay, based upon the character John Shaft from the novel by Ernest Tidyman.

Here is what Jessie T. Usher had to share about working on the new film “Shaft.”

New York Amsterdam News: The first time we spoke you shared that you were inspired to learn a lot behind the camera; I suggested shadowing. Did you do any of that with director Tim Story on “Shaft”?

Jessie T. Usher: You are absolutely right, I did say that (laughing) and I am happy to say that I am absolutely able to do those things, so yes, I did. It was amazing to work with someone like Tim Story so [shadowing], it helps. Tim is a very different director than anyone that I’ve worked with before.

JTU: Meaning his ability to micromanage. I didn’t know it was possible to micromanage all the things that he does in such an effortless way. I’ve never seen a director come in that can deal with actors the way that he does but also create this world around him that seems like it was already there. He knows his movie through and through. He’s a great listener. Tim creates a world so that we start shooting and it feels like you’re in a Shaft film. Everything felt right. He has a dialogue that actors understand. He’s not like another director but don’t tell him that I said that.

AMN: Too late! Tim used the New York Amsterdam News’ building and its headline in the movie, so that was fun and we love him even more now.

JTU: Right. I caught that. It makes sense that Shaft who pretty much owns Harlem would have an office inside the historic Amsterdam News offices.

AMN: The New York Amsterdam News was started in 1909 with a $10 investment, six pieces of paper and a pencil. We are still standing—we are “badass” like who?

AMN: Speaking of Shaft, do you have a Samuel L. Jackson story?

JTU: Samuel L. Jackson is one of the most professional actors that I’ve ever worked with. He takes his job seriously. Comedy is hard.

AMN: This is a very funny movie. I could not stop laughing! Hey, do you have a Samuel L. Jackson story? Are you avoiding this question?

JTU: (laughing) No. I have a great one. So Sam has eyes all around his head. So, I was sitting and having a conversation with him. We had just finished our second (and final) take. He does two takes maybe, maybe, maybe three takes if it’s really, really necessary. We rehearse a lot before so we are ready. So we’ve done the second take. He’s putting his coat and hat on and Tim [Story] comes over and says “Sam, we need to do a third take.” Now Sam, not stopping what he’s doing, he’s putting his jacket on to leave and he asks [Tim] why? I’m watching the prop guy lay out bullet shells while he’s talking to the director. Sam, without breaking eye contact with Tim, says, “I know we’re not doing another take for that MF” talking about the guy behind him. Tim says well, “We’re looking at the take and we realize that it’s a shootout that happens and it’s not enough bullet shells on the ground and it won’t match.” Sam says, “You should be shooting the money [shot] and I’m the money. If people are paying to look at some G-damn bullet shells then we f*@ failed in this movie,” and then he just walked off set.