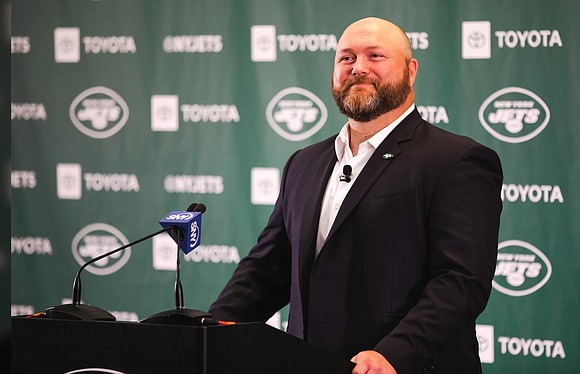 Despite the news several weeks ago of the firing of general manager Mike Maccagnan, surprising the sports world and probably even Maccagnan, employment agencies now have one less job to offer. The New York Jets have filled their opening by hiring Joe Douglas, now the former vice president of player personnel for the Philadelphia Eagles. He was introduced with fanfare at the Jets facility on Tuesday, June 11.

“This is a good day. This is a really good day,” stated Jets CEO Christopher Johnson while addressing the press and audience, pleased with the team’s hire.

Douglas is highly respected around the NFL. His Eagles’ biography states that he played an integral role in helping construct the roster of their 2017-18 Super Bowl team, the first Super Bowl win in their franchise history.

Douglas joined Philadelphia in 2016 after working the 2015 season as the director of college scouting for the Chicago Bears. Coincidentally, Adam Gase, the Jets’ new head coach hired in January, was a co-worker, working as the Bears’ offensive coordinator. They’ve remained friends since. Douglas states that an invitation to dinner from Gase at his home when he first arrived to Chicago initiated the friendship. They hung, the wives hung. A friendship began.

Before Chicago, Douglas got his NFL start, learned, worked his way up from 2000 to 2015 under the highly respected Ozzie Newsome, general manager of the Baltimore Ravens. The team won Super Bowls in 2001 and in 2013.

Douglas, 42, from Mechanicsville, Va., was an offensive tackle at the University of Richmond, graduating in 1999.

Contractually, Douglas, recognized for his ability to evaluate talent and his work ethic, will control the Jets’ 53-man roster and have final say. He’s been given a six year contract at a reported $3 million per year.

“I know he’s done a great job with the Eagles,” said franchise quarterback Sam Darnold. “And every other place he’s been. I’m looking forward to working with him, and seeing what he can do for our team.”

Douglas is the fourth general manager hired by the Jets in the last eight seasons. It was rumored that Maccagnan, abruptly fired in mid-May, would be fired days after the NFL Draft in late April, but the move, denied by all involved, didn’t materialize. It did three weeks later.