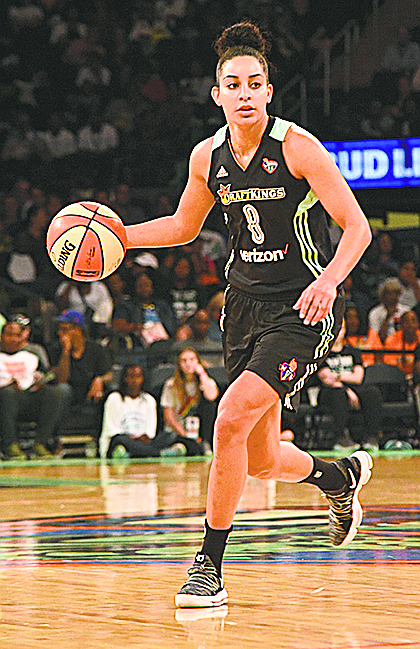 The New York Liberty have been improving game by game, and things finally clicked on Sunday, June 9, when the team scored an 88–78 home court win over the Las Vegas Aces. With 21 points, Tina Charles was the top Liberty scorer, followed by fellow University of Connecticut alumni Bria Hartley with 17 points and Kia Nurse with 15 points.

“We always had confidence…it’s just about how we close out the game,” said Charles after the win. “Most of the games we lost we have been in. I am just happy we were able to come out with the victory.”

Charles said getting stops proved crucial. She also praised teammate Tanisha Wright, who previously played with the Liberty in 2015 and ’16, for effectively controlling the tempo and setting up plays.

Hartley said the win was important after several close losses. “We wanted to get over that hump and get our first win,” Hartley said. “We just want to build on this. We have had great energy and intensity going into these last couple of games and we want to carry that into the next one.”

Aces coach Bill Laimbeer, who coached the Liberty from 2013-17, praised the Liberty’s effort. “They wanted this win more than we wanted it—that was the bottom line,” said Laimbeer. We didn’t come out with the energy and intensity from the start.”

“Tina [Charles] is a phenomenal basketball player,” he added. “She’ll keep them in the game. She enhances her performance every year. She gives her team the chance to win the game.”

Liberty coach Katie Smith was pleased with the team’s sustained energy. “From start to finish this game, I think for me and for our crew, was one of the best energy, one of the best executions,” said Smith. “I’m proud of the ones that are bringing it every day. Every day they show up ready to go.”

The Liberty heads out to the West Coast for back-to-back games. On Friday night, it’s a rematch with the Aces and then on Saturday, New York takes on long-time rivals the Los Angeles Sparks. The next home game at Westchester County Center is on Wednesday, June 19, against the Chicago Sky.