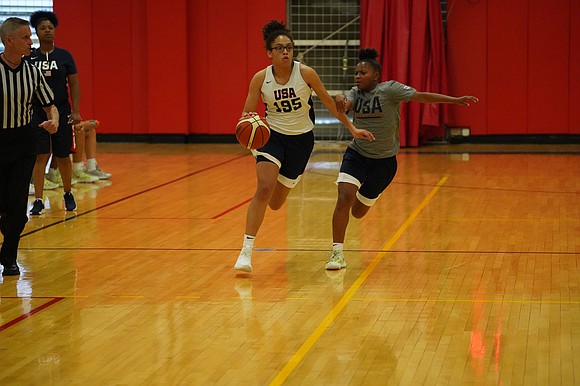 She’s a distinctive presence on the court, a 5-foot-11 point guard wearing glasses. Olivia Miles of Phillipsburg, N.J., said she’s always worn sports glasses for playing. They don’t bother her, so she prefers not to switch to contact lenses.

Miles, 16, has spent the past week in Colorado Springs training with fellow members of USA Basketball’s Women’s U16 National Team. This week, she and her teammates head to Puerto Aysen, Chile for the 2019 FIBA Americas U16 Championships.

This was Miles’ second time trying out for a USA Basketball team. Last year she tried out for the USA U17 World Cup Team, which earned her an invitation to this year’s tryout. “I knew what they were expecting and how demanding the tryouts are,” said Miles. “I came back and got the job done.”

She put in the training necessary to be sharp and ready for the tryouts—running, agility work and shooting. Miles, who recently finished her sophomore year at Blair Academy, got a FIBA basketball, so she could practice with it.

“During the trials, I would say confidence and shaking off a bad play because there’s a lot more basketball to be played,” said Miles. “Keeping my head up and playing my game and not anyone else’s.”

Making the roster was fulfilling and let Miles know that hard work pays off. “I have two more years of high school, but this is so amazing. It made me so happy,” she said.

Miles played several sports as a young child, but by fifth grade she was playing basketball seriously on a club team. She also loved soccer and softball and still continues with soccer. One of the great point guards, Sue Bird, has said soccer helped her with foot speed, and Miles agreed. “The footwork translates to basketball,” said Miles.

Being a point guard has helped shape Miles’ personality. “I’m a naturally quiet person, but on the floor that’s not acceptable for a point guard,” she said. “You’re responsible for your team. You need to set them up, get them shots where they can shoot it and do something with the ball. Being a point guard has developed communicative skills for me and being a leader, not only on the court, but off the court in the classroom or with my friends and everyone around me.”