Pressure is on the Raptors after classic Game 5 defeat 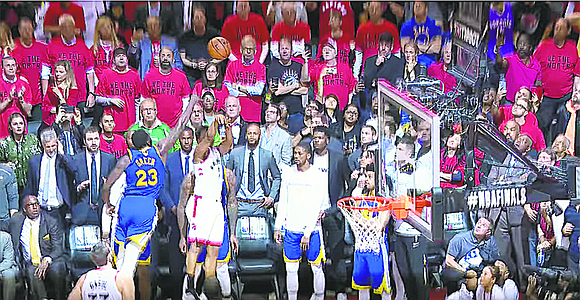 It was a classic game in what has been an NBA Finals defined by the steady brilliance of the Toronto Raptors’ Kawhi Leonard and the attrition experienced by the Golden State Warriors. Game 5 this past Monday between the Raptors and the Warriors in Toronto could have symbolically concluded with point guard Kyle Lowry knocking down a series-winning shot at the buzzer from the deep left corner in front of the Warriors’ bench over a closing Draymond Green.

Instead the longest tenured Raptors player, the team’s heart and soul, who in seven seasons with the franchise helped lead them to five first place finishes in the Atlantic Division, four agonizing Eastern Conference semifinals appearances and two conference finals before finally reaching the NBA Finals this June, clanked the ball off the side of the glass. Consequently, the Warriors escaped with a gripping 106-105 win to push the best-of-seven series back to Oakland for Game 6 tonight (Thursday) with the Raptors up 3-2.

“Draymond got a piece of it,” said Lowry in explaining his missed shot. “I’m not going to miss it behind,” he assessed before stopping short of saying the glass. “He got a little piece of it.” Now the pressure is on the Raptors to win one of the two potential remaining games. They can win the franchise’s first NBA title by beating the Warriors in the last game the home team will play at Oracle Arena. The Warriors are moving to San Francisco and the Chase Arena located in the Mission Bay area of the city.

“If you would have probably told me at the start of this thing, ‘If we could fast forward to a 3-2 lead, you want to take it?’” said Raptors head coach Nick Nurse following his team’s deflating loss, “I would probably say yes.”

Throughout this postseason, the Raptors have displayed resilience and mental toughness. Coming back from a 2-0 deficit against the Milwaukee Bucks in the conference semifinals to win four straight. They have been the better team versus the Warriors in this series, in large part due to the rash of injuries sustained by two-time defending champions, the most significant being to Kevin Durant.

After not playing since May 8 when he strained his right calf, the 2017 and 2018 Finals MVP returned on Monday in Game 5 but suffered an Achilles injury early in the second quarter. The Warriors were also without All-Star guard Klay Thompson with left hamstring tightness and key reserve forward Kevon Looney with a chest injury for Game 3.

The spotlight will now shine even more brightly on Raptors forward Kawhi Leonard, who this postseason has reestablished himself as one of—if not the best—player in the world. The 2014 Finals MVP has been sensational the past two months and will try to avoid a winner-take-all Game 7 back in Toronto on Sunday with a win tonight.