Temptations recognized by the Tony, people and peers 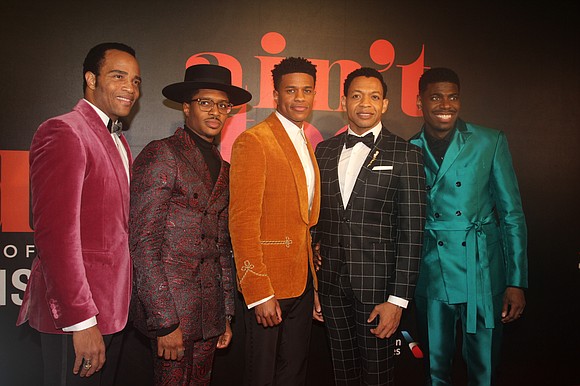 Shortly after the Broadway premiere of her creative baby “Ain’t Too Proud: The Life And Times of The Temptations” another ‘T’ word, outside of Temptations, was bought up to playwright/actress, Dominique Morisseau. That word was TONY’s. That thought of nominations and possible wins, while appreciated, were somewhat curved as to not put the carriage before the horse. Tactfully she gave a breakdown of the difference between AWARDs and REWARDS. Here we’ll just go with the dictionary definition.

Awards are tokens of appreciation, which are given to individuals, a group of people, or an organization in recognition of their excellence in a certain field. Awards are publicly presented and generally are accompanied by a title, certificate, commemorative plaque, medal, badge, pin, or ribbon or trophy.

A reward is something that is given for a person’s merit, service or hardship. The acknowledgements range, but for the most part are private or personal affairs, and for the recipients, those interpersonal appreciative plaudits mean much more. Reason being: awards can at times reflect what was popular at a particular time, rewards can come over the course of a lifetime. That’s the true measure of the work you put in.

This past week we got to see both dynamics as they pertain to Dominique and The Temptations. In the venue in which many were solidified as superstars and a few deemed legendary the Apollo Theater celebrated its 14th annual Spring Gala, raising over $2 million for its year-round artistic and community programming initiatives. The concert portion of the evening was hosted by comedian Amanda Seales, and opened with a rousing performance by Black Violin. The celebrations continued with crowd-pleasing performances by Estelle, Jose James, Liv Warfield, Morris Day and The Time, Kelvin Rolston, Jr., Caleb Hawley, Cheryl Pepsii Riley, and James Harkness from the cast of Broadway’s “Ain’t Too Proud: The Life and Times of The Temptations.” The energy of The Temptations was in full force at the theater, as founding member Otis Williams made a special appearance, and audiences were treated to a celebratory performance from the current touring version of the group: Larry Braggs, Willie Green, Ron Tyson, Terry Weeks. The Temptations were honored just days before with a place on the esteemed Apollo Walk of Fame. Uptown love!!!

The energy and stakes were higher downtown at Radio City Music Hall as the titans of Broadway battled it out in varying categories at the 73rd annual Tony Awards. While nominated for 12, “Ain’t Too Proud: The Life And Times of The Temptations” was almost shut out, with the sole winner going to Sergio Trujillo for Best Choreography. Harold Wheeler who currently helms Orchestrations was bestowed with one of three lifetime achievement awards. Having arranged and produced for luminaries such as Aretha Franklin, Anita Baker, Peabo Bryson, Della Reese, Nina Simone, B.B. King, Smokey Robinson, Diana Ross, Freda Payne, Kathleen Battle, Ray Charles, Stevie Wonder, Al Green, Dizzy Gillespie, Gloria Gaynor, Whitney Houston, Stephanie Mills, and Debbie Allen during his illustrious career this marked the first time Wheeler was honored after seven nominations in his 30 productions. One of the big winners of the night was the show “Hadestown” and an integral cog of the production, Andre De Shields, was honored with Best Performance by an Actor in a Featured Role in a Musical.

Over and Out. Holla next week y’all. Til then, enjoy the nightlife.