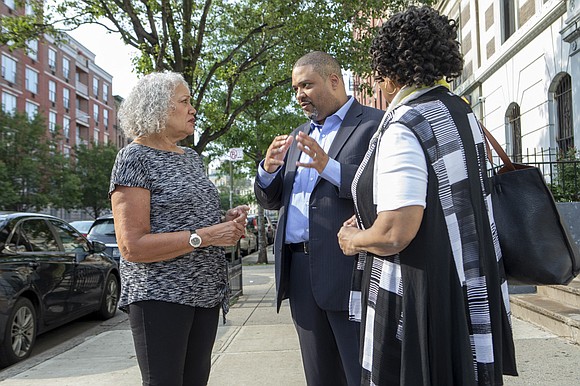 The Harlem native posted a two-minute video on YouTube on Monday officially announcing his candidacy. Running as a Democrat, Brag said he wants to make the office the progressive leader on criminal justice reform

“I’m running because far too often, we have two standards of justice—one for the rich and powerful and connected and another for everyone else,” Bragg said during an interview with the AmNews. “That system criminalizes poverty the footprint is big. My life experience has led me to this civil rights work.”

Bragg is pledging to not take money from any corporations, lobbyists or attorney whose practice takes them to the District Attorney’s office. Even though the The Democratic Primary isn’t until June 2021, Bragg said the current climate in the legal system is in urgent need for change. He wants the D.A.’s office to be a symbol criminal justice reform and reversing mass incarceration.

Currently a professor at New York Law School and Co-Chair of its Racial Justice Project, Bragg previously served as the Chief Deputy Attorney General of the State of New York. He oversaw several well-known cases including the lawsuit against Harvey Weinstein and his company and Trump administration’s attempt to include the question of citizenship on the census.

Bragg also organized and served as the first Chief of the Special Investigations and Prosecutions Unit to review police-involved killings, established by order of the Governor. Pulling back the veil on the impact of the NYPD’s stop-and-frisk practices, Bragg’s investigation of the department between 2009 and 2012 revealed that out of 2.4 million stops less than .1% resulted in convictions.

“I want to make the Manhattan District Attorney’s Office a national leader on reversing mass incarceration,” he said. “I’ll create a civil rights unit to handle investigations of police misconduct, overhaul the sex crimes unit to get justice for victims, and work to bring new funding and focus to reentry programs. Everything I do will be about ensuring one standard of justice for all of us who call Manhattan home.”