Blue for Sudan: Sudan protest supporters speak out on the Sudan crisis 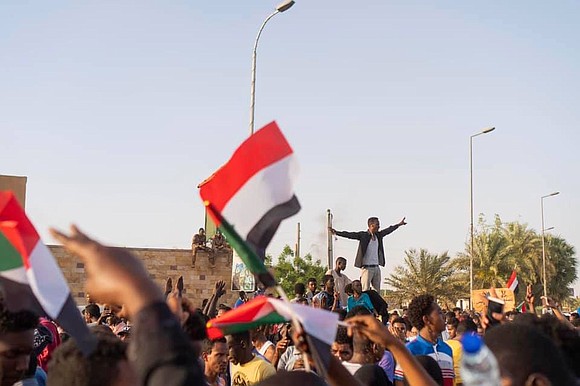 Social media profiles have turned blue to stand in solidarity with and bring awareness to the civil crisis in Sudan. Sources report that the East African nation is under severe attack since the removal of the former president, Omar al Bashir, from office.

Locals in Sudan are worried about the state in which the country is in, especially because military force is being used on civilians. “People are barricading the streets to make sure that the janjaweed [militia] doesn’t enter their neighborhoods,” says Bayan Bubakr, an NYU college graduate from Sudan. “But they have weapons gifted to them by the UAE and Saudi Arabia. There’s not much we can do to stay safe besides stay in our homes.”

The situation has been made worse by outside anti-democracy agitators, such as Egypt, Saudi Arabia and the UAE, who had allegedly attempted to keep president al Bashir in power. Reports state that Egyptian President Abdel Fatah al-Sisi and Saudi crown prince Mohammed bin Salman promised $3 billion in aid to the Sudanese military leaders. According to Tisdal, the UAE crown prince, bin Zayed promised to “preserve Sudan’s security and stability.” Al Sisi appears to be playing for both teams in the struggle because of Egypt’s interest in the Nile river, reports Tisdal. Egypt chairs the AU which had initially set a 15-day deadline for the Sudanese military to hand over power. This deadline has been extended to three months post al-Sisi’s intervention.

Bubakr also shared that “this revolution was in the making for a long time. A lot of the issues facing the Sudanese people today are a result of colonialism and its lasting effects.”

Foreign nations are still involved in the politics of the country as “the U.S. has sent envoys to negotiate between the TMC and activists, and the Ethiopian PM was here last week to facilitate dialogue,” she continued. “The AU’s suspension of Sudan was meant to delegitimize the TMC’s perceived position as Sudan’s sovereign governing body. They did the same thing with Egypt in 2013, following the Rabaa Massacre, but el-Sisi (and the army) still managed to take control of the country. I can’t say how helpful this move will be.”

National presiding minister of The House of the Lord Churches the Rev. Herbert Daughtry articulated that the AU must have had good reasons to suspend Sudan. However, he believes that AU could have provided assistance and force to the nation. “I think the AU should not have suspended Sudan. Instead, it would be more helpful if they intervened and assisted the people. Instead of kicking them out, the AU should try to persuade the military forces to stop what they’re doing. We can’t wait for a civil war to break out.” Daughtry has been previously involved in activism against al Bashir in Darfur.

“I celebrated when Omar al Bashir was removed from office and arrested because to me that signified a new beginning for Sudan,” confessed Victoria Deng, a South Sudanese student who now lives in the U.S. “I now understand that his regime lives on even in his absence from the political arena. I’ve read horrifying articles about the military’s suppression of protesters, secret detentions centers in Khartoum, mass slaughter and rape of innocent civilians under the ‘transitional government’ if we can call it that. These atrocities remind me of those that were committed in South Sudan (the birthplace of my parents).” She urged the people of Sudan to regain their strength because the revolution is just starting. “Taking down a dictator was only just the beginning of the struggle,” she said.