Call them the ‘Exonerated Five’ 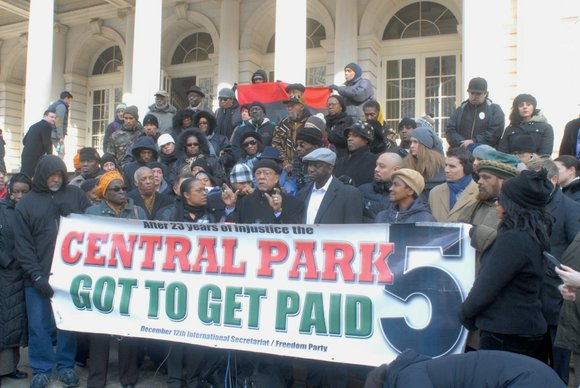 Aftershocks continue after the release of Ava DuVernay’s miniseries “When They See Us” based on the Exonerated (formerly referred to as the Central Park) Five. The series has sparked a renewed interest in the case 30 years later and is having an impact on the professional lives of those involved.

“Not only will you have to reopen the cases, we might open a case on you to find out what criminal activity you have been involved in, Cy Vance,” activist Tamika Mallory said at the rally.

Public Advocate Jumaane Williams was also at the rally and said that calls for Vance to reopen the case won’t let up.

“District Attorney Vance is even denying justice has been delayed,” Williams said. “He acknowledges the systemic injustice and human tragedy of wrongful convictions, but will not take action that could unearth and correct them, particularly in cases where no DNA evidence was present.”

The AmNews reached out to Vance’s office for a comment on the issue. A spokesperson sent a letter the district attorney sent to Williams outlining that he will not reopen any of Fairstein’s past cases or fire Lederer.

“I wholeheartedly agree that the release of ‘When They See Us’ affords a new opportunity to seek justice,” Vance said. “I propose that we capitalize on the attention garnered by the series to make more New Yorkers aware of the opportunity for review of wrongful convictions. We are prepared to do this work and to seize upon the rising consciousness of the systemic criminal legal issues raised in the film.”

The domino effect began when Fairstein’s career began to crumble shortly after the miniseries’ premiere. Fairstein is portrayed by Felicity Huffman and fallout from the miniseries has caused Fairstein to be dropped from her book publisher and resign from her position as a board of trustees member for her alma mater, Vassar College. Her awards from the Mystery Writers of America and Glamour magazine were also revoked.

Fairstein is best remembered during the case for supervising the prosecution in 1989 and 1990. The Exonerated Five said that their false confessions were coerced while they were in custody leading to their convictions. In a recent op-ed in the Wall Street Journal, Fairstein said the miniseries falsely portrays her and that she followed proper protocol.

“Ms. DuVernay’s film attempts to portray me as an overzealous prosecutor and a bigot, the police as incompetent or worse, and the five suspects as innocent of all charges against them,” she said. “None of this is true.”

Lederer recently resigned from her part-time lecturer position at Columbia Law School. According to reports, calls from the Black Student Organization and the Black Law Student Association were cause for her to step down. Lederer said in a statement that the publicity from the film led to her decision.

The fallout from “When They See Us” is even hitting the White House. This week White House correspondent April Ryan asked President Donald Trump about apologizing to the Exonerated Five. In 1989, Trump took out full-page newspaper ads calling for their deaths before their trial. He questioned Ryan on the timing of the question seemingly unaware about the miniseries.

“You have people on both sides of that. They admitted their guilt,” Trump said. “If you look at Linda Fairstein and if you look at some of the prosecutors, they think that the city should never have settled that case. So we’ll leave it at that.”