With the first pick in the NBA Draft, the New Orleans Pelicans selects... 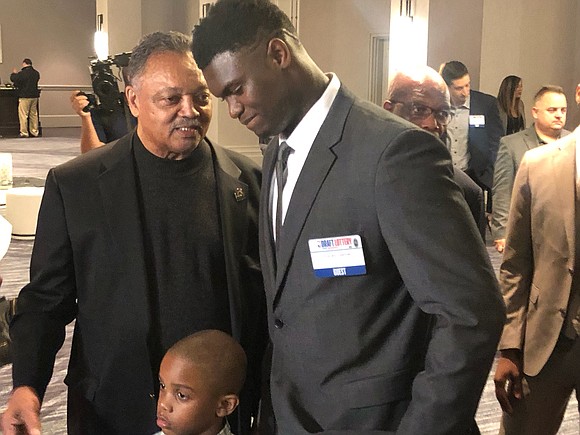 The 2019 NBA Draft takes place tonight (Thursday, June 20) in the borough of Brooklyn’s Barclays Center—the home of the Brooklyn Nets. This is where the NBA’s newly chosen group of teen ballplayers will be selected to earn millions upon millions of dollars for applying their extroadinary basketball talents.

Teams are banking on those chosen to be the next Michael Jordan, LeBron James, Magic, Bird, Kobe. One player can change, alter a team’s future.

The No. 1 projected pick tonight is Zion Williamson, a 6-foot-7, 280 pound power forward from Duke University who was this season’s college basketball standout.

Much will be expected from the player with a biblical name that means “highest point” and represents the biblical term for the Promised Land, which is where the New Orleans Pelicans, the team with the first pick in the draft, expect his talents to take them.

And much will be given. Williamson will cash in on endorsement deals, specifically athletic apparel (sneakers) that will tower over, dwarf his first rookie contract which is capped for new players entering the league.

Last year’s No. 1, DeAndre Ayton, chosen by the Phoenix Suns, earned $6,804,300 for his first pro season, a sum negotiated under the Collective Bargaining Agreement.

Ja Morant, a 6-3 point guard from Murray State, is expected to be chosen second by Memphis, while the Knicks are expected to pick Williamson’s college teammate, R.J. Barrett, 6-7, a 210 pound shooting guard/small forward. Up until yesterday, teams were still working players out, scouting, researching to finalize their decisions.

After NBA Commissioner Adam Silver gets the proceedings started with the Pelicans’ choice of Williamson, he’ll continue on through with picks from the Memphis Grizzlies (2), the New York Knicks at 3, and the Pelicans again at 4. They received the fourth pick in addition to their one earlier this week in a trade with the Los Angeles Lakers for big man Anthony Davis.

The Cleveland Cavaliers will have the fifth pick, the Phoenix Suns sixth, the Chicago Bulls pick 7th, the Atlanta Hawks 8th, the Washington Wizards pick 9th, and Atlanta again at 10.