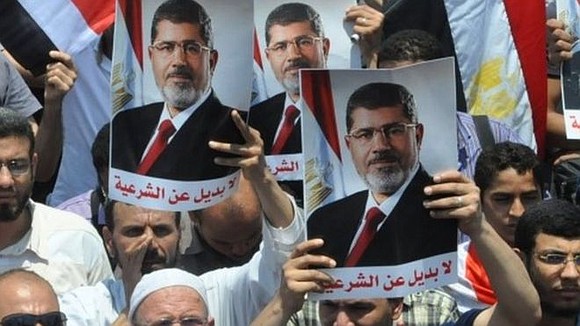 (GIN)—Egyptian ex-president Mohammed Morsi, persecuted by the current military regime according to rights activists, collapsed on the stand and died after giving testimony in his trial, it was reported on state TV.

Morsi, 67, had been speaking from the glass “cage” where he was confined during sessions. He warned of “many secrets” he could reveal, when suddenly he collapsed.

The leader of the Muslim Brotherhood was stricken by a heart attack, sources said. State TV said Morsi died before he could be taken to the hospital.

Mohammed Sudan, leading member of the Muslim Brotherhood in London, described Morsi’s death as “premeditated murder” saying that the former president was banned from receiving medicine or visits and there was little information about his health condition.

“He has been placed behind glass cage. No one can hear him or know what is happening to him. He hasn’t received any visits for months or nearly a year. He complained before that he doesn’t get his medicine. This is premeditated murder. This is slow death.”

The former president was known to have been suffering from several ailments, including diabetes and liver disease.

Morsi was elected in 2012 after the nation’s Arab Spring revolts that toppled the autocratic President Hosni Mubarak, an ally of the U.S. who ruled with an iron fist. He led Egypt to become the first Arab state to join the attack on Iraq but estranged his people by the use of torture, denying freedom of speech, and enabling police violence.

Morsi improved relations with the U.S., recognized the state of Israel, and developed a working relationship with President Obama that brought temporary peace between Israel and the Palestinian group Hamas.

But his national legislation was a let-down to followers. He granted himself unlimited powers without judicial oversight or review.

Soon, the young population wanted Morsi to step down as well. He was ousted by the military in 2013. Hundreds of Muslim Brotherhood members were sentenced to death following proceedings that violated due process rights and failed to establish individual guilt, Human Rights Watch said.

Now, even Morsi’s opposition has denounced his treatment in prison and the long time he spent in solitary confinement.

“Morsi’s treatment is a window into the appalling conditions suffered by thousands of political detainees in Egypt.”

In Turkey, President Recep Tayyip Erdogan reacted angrily to news of Morsi’s death. “History will never forget those tyrants who led to his death by putting him in jail and threatening him with execution,” he said in a televised speech.

And on Twitter, newspaper columnist Hisham Melhem wrote: “One could argue #MohamedMorsi was not fit to be pres.of #Egypt, that he was not a true democrat & with known prejudices; but he was the first civilian democratically elected in Egypt’s history. Not as brutal as those preceded him or the monstrosity that toppled him.”