Hilliard revs up for a busy summer 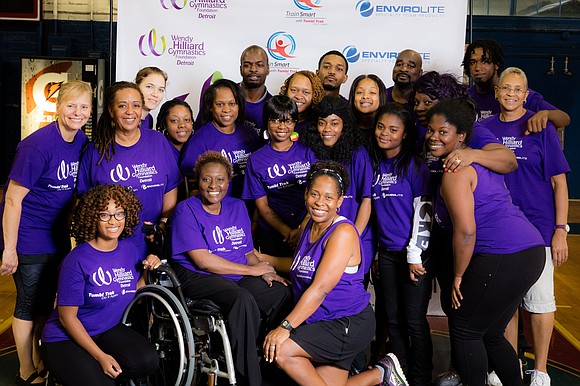 Wendy Hilliard (bottom center) with people from the Detroit branch of the WHGF.

On June 1, the Wendy Hilliard Gymnastics Foundation presented its annual showcase, “Showtime in Harlem,” at the historic Harlem Armory. Attendance was so robust the young gymnasts put on two showcases to accommodate all the eager attendees.

Founded in 1996, WHGF provides free and low-cost quality gymnastics programs for inner-city youth ages three to 17. About 300 kids participated this year in the Saturday community program that ran from October through June. There were also about 50 competitive team kids, who range in age from seven to 17.

“They’re doing really well in competition. We went to Trinidad this year, which was fun,” said Hilliard, the first African-American rhythmic gymnast to represent the United States in international and Olympic competition. “It’s great for them to train really hard and then get to travel. That’s important not only for the kids, but for their families.

“This was the first gymnastics meet I’ve gone to with like 300 kids of color,” she added. “Usually, our team is the only team with a majority kids of color.”

This summer, WHGF will host a six-week camp at the Harlem Armory. There are workshops and other fun activities, such as day trips. The competitive gymnasts also train during the summer. Some of the competitive team members will also spend a week at Camp Woodward, a sleep away gymnastics camp.

Three years ago, Hilliard also brought the WHGF to her hometown of Detroit. This will be the first year for the summer program there.

“They’ve been hungry for really good programming,” said Hilliard, a member of the USA Gymnastics Hall of Fame. “We just did a showcase in southwest Detroit June 8 and had over 300 people. It was standing room only. They were so excited to have their kids participate in gymnastics.

“We have some really talented kids in Detroit, and we want them to have the opportunity to do a little bit of high level gymnastics as well.”

With a brief break before summer season starts, Hilliard reflected on a really good year. She praised her staff, who did a great job with the kids in the community program.