‘My Fair Lady’ is B’way gold 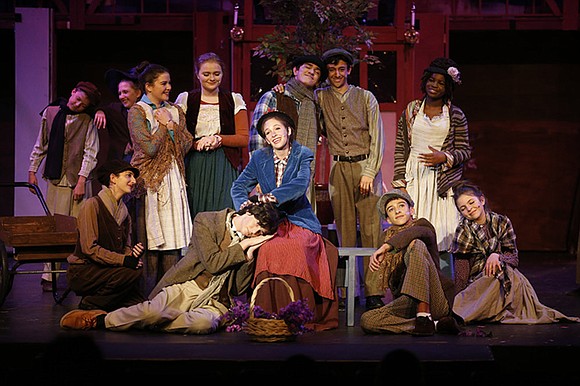 I absolutely love “My Fair Lady” at Lincoln Center’s Vivian Beaumont located at 150 W 65th Street. This revival of the Lerner & Loewe classic musical is everything that a musical should be! It is a stupendous musical production that has gorgeous costumes, a magnificent cast and beautiful, sometimes funny songs with book and lyrics by Alan Jay Lerner and music by Frederick Loewe.

It’s one of those musicals where you’ve seen the movies hundreds of times, you know all the songs and you know how you expect them to be sung and it does not disappoint.

It is the story of Eliza Doolittle, a poor girl who sells flowers on the streets of London, but decides she wants to do more with her life after encountering Professor Henry Higgins, an expert in dialects. Professor Higgins takes her under his wing as part of an experiment to show he can improve her life by giving her better speech. Laura Benanti, the theater veteran, is brilliantly cast in the role of Eliza Doolittle. Her Broadway caliber voice makes every number a sheer delight to experience. She also has an amazing chemistry with her co-star Harry Hadden-Paton, who superbly carries off the role of Professor Higgins. Danny Burstein is hilarious and certainly knows his way around the stage and sports a few dance moves as the loveable, drunk, unworthy, poor Eliza’s father, Alfred P. Doolittle. He plays this role with such splendor, it is a treat every time he takes the stage. Allan Corduner is charming as Colonel Pickering. Rosemary Harris shines in the role of Mrs. Higgins, the rich, and kind mother of Professor Higgins. Christian Dante White is a perfect example of nontraditional casting at its level-best as he plays the role of Freddy Eynsford-Hill, the young man from a rich family that is smitten with Eliza. Casting an African-American in the role was a fantastic choice and believe me, you know it when you hear him perform this character’s signature song the phenomenal, “On The Street Where You Live.” This number is nothing less than a “showstopper.”

But let me share that there are so many “showstoppers” in this extraordinary production, such as “Wouldn’t It Be Loverly,” “With a Little Bit of Luck,” “Just You Wait,” and “Get Me To The Church On Time.” I know the songs, I love the songs and hearing each one gave me such a good feeling inside. My spirits were lifted high watching this PERFECT production with stellar direction by Barlett Sher, enchanting choreography by Christopher Gatteli, unbelievably detailed and imaginative sets by Michael Yeargan and absolutely gorgeous, elegant, sophisticated costumes by Catherine Zuber.

Whether you are familiar with this timeless, classic or have never experienced it, put it on your agenda. When musical theater is this outstanding you want to shout it from the rooftops! “My Fair Lady” is Broadway gold!