Remembering our ancestors who didn’t survive the voyage 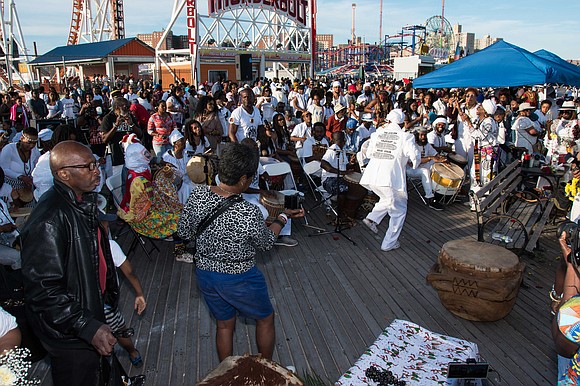 The 30th annual Tribute to the Ancestors of the Middle Passage hosted by City University, was held on Saturday, June 8, 2019, at Brooklyn’s Coney Island boardwalk. The tribute was held in remembrance of enslaved Africans who did not survive the Middle Passage, the transatlantic shipment of slaves during the 1800s. Hundreds gathered on the 17th street boardwalk in native African attire and all-white uniforms, to stand in solidarity with the slaves who drowned, were thrown overboard, or simply did not survive the slave passage.

The Middle Passage also known as the Triangular Trade, was a voyage of enslaved Africans across the Atlantic Ocean to the Americas. From the early 1500s until about 1866, about 12.8 million slaves were transported by Europeans from Africa to the Americas. About 1.8 million enslaved Africans died during the voyage across the Atlantic. The mass shipment of slaves were not only happening here in the United States, but also in the Caribbean, Central America and South America. The slave trade is not only considered one of the lowest points in human history, but it also wiped out the identities of millions of Africans in the diaspora. Saturday’s event was a way of remembering the enslaved Africans but also the ancestors in Africa who were murdered at the hands of the European settlers.

“It’s a sacrifice they made for us coming here. Some of them jumped overboard, some of them were thrown overboard,” said Bayeeda, a 38 year-old Brooklyn resident. “Their bones and body are at the bottoms of the ocean, so it’s important we remember them.”

The tribute was not only for the enslaved Africans who died in the slave trade, it was also a ceremony for African-American artists, actors, athletes and other celebrities who have passed over the last year. The attendees of the event believed it was important to not only show their respect but also to celebrate the lives of these individuals.

Native clothing and dances were all part of the festivities Saturday; they were met by Haitian Spiritual Dancers, who danced to the beating of the native yoruba talking drum. Also part of the musical tribute was Guyanese master drummer Bapo Mapho who was accompanied by additional drummers.

Damia Margarita, also known as Mrs. D, a Panamanian-American living in Brooklyn, believes that not only Africans should be more aware about the impact of the Middle Passage, but also Caribbean nationals, Central Americans and those from some parts of South America. She believes as a person of Central American descent that it is important for her to show respect to the enslaved Africans, because she knows Africans and Central Americans alike can relate to the slave trade.

“We need to know more about our culture because we’re only taught what we learn in school,” Margarita said. “Spanish, Caribbeans, and Central Americans all should want to know know more about their history and the impact it had on their societies.”