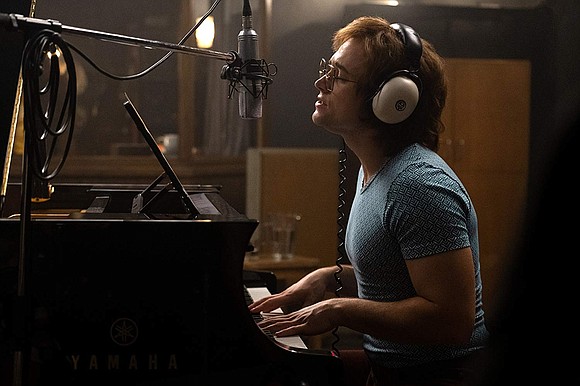 “Rocketman” quite simply is the evolution of Reginald Kenneth Dwight from a shy lonely kid into the internationally known music phenomenon Elton John. It’s a difficult process starting with his childhood where Reginald is reared by cold and distant parents. However, even at that early stage he shows musical brilliance, getting a scholarship to the prestigious Royal Academy of Music in London. The story examines his depression, substance abuse and acceptance of his sexual orientation, and unfolds as he shares key moments of his life with a therapist and members of a group counseling session.

“Rocketman” is an exceptional film worthy of Oscar consideration. And it’s a See It! It proves the saying, “adulthood is that time in life when we get over our childhood”—despite his rare talent and worldwide fame, Reginald/Elton struggles through his adolescence into adulthood trying to gain acceptance, love and respect from his parents.

Getting “Rocketman” to the big screen was a lengthy process. Originally set to go into production in 2001 with Justin Timberlake as John, Elton battled with studios’ wanting to tone down the sex and drugs to garner a PG-13 rating. But John felt strongly that his story could not be accurately and fully told without including the decadence.

In April 2018, the project moved forward with Taron Egerton as Elton and there has never been a better casting choice! Egerton does all of the singing, while not as strongly as John in his heyday, but along with his acting and dancing Egerton is nearly perfect. Overall, the entire cast is superb. Bryce Dallas Howard, Ron Howard’s daughter and an accomplished actress in her own right, plays Elton’s cold and verbally abusive mother. Jamie Bell stars as the silent force behind John’s success, his songwriter, Bernie Taupin and one of the few people who cared about Elton as a friend and not a source of money.

“Rocketman” succeeds because it’s not preachy or heavy handed. Viewers will sympathize with Elton but that’s not the film’s intent; it’s the natural response to seeing his story. It also includes his vast library of songs and showcases how Taupin’s lyrics were often relevant to what was going on in their lives at the time. (For example, “Goodbye Yellow Brick Road” is about when Taupin needs a break from the demanding travel schedule Elton maintains and, as the lyrics state, returns to his farm.)

It’s difficult to give “Rocketman” a cast diversity rating. With truth-based stories, the casts have to reflect the races of the people involved. Then, as today, there were many African-Americans in the music industry, which is shown in the film. Elton got his start in the ’60s, the time of the Beatles and Motown. He interacts with Black groups and, according to the film, it was Black entertainers who introduced him to the gay (or homosexual, as it was more often referred to then) lifestyle.

“Rocketman” is just over two hours and is rated R for obvious reasons. It is a truly exceptional production. And you really should “See It!”