They may have lost the series, but they didn’t have to lose the game 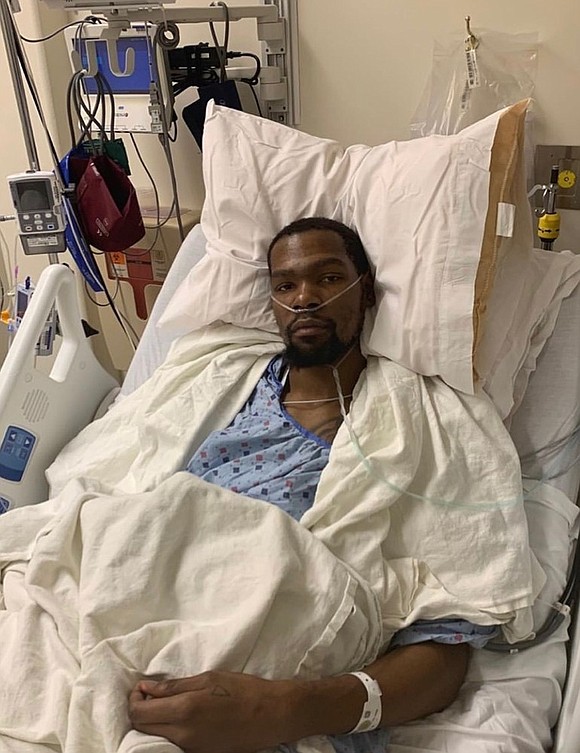 Kevin Durant in his hospital bed

When Klay Thompson went down in the third quarter of Game 6 of the NBA Finals last Thursday, tearing his ACL (left leg) after a failed two-handed dunk on Danny Green, it seemed that the Golden State Warriors’ chances for three-peating were over. All seemed lost. But it really wasn’t.

Golden State doomed themselves. Their six missed free throws, two by Andre Iguodola, two by Draymond Green and two by Boogie Cousins during the game’s closing minutes, ceased all chances of a Game 7. A 114-110 series ending loss to the Toronto Raptors, giving them the Raptors’ first NBA championship in their 26 year history.

It’s without an argument that the Warriors would have lost Game 7 in Toronto Sunday evening, Father’s Day, due to their multiple, back-to-back injuries, as well as fatigue, but those six free throws could have secured one more win in their building, Oracle Arena. Instead, it became the last NBA/Golden State game that will be played there. Golden State now moves to their brand-new facility in San Francisco.

Thompson’s ACL, Kevin Durant’s torn Achilles, a hobbled Cousins, Iguodola, Kevin Looney, and a worn-out Stephen Curry who missed a game ending three that would have put the Warriors in the lead.

“We can sit here and say, well, if this hadn’t happened, or that hadn’t happened,” said Kerr, putting his team’s situation in a proper perspective. What matters to him now is that, “Kevin Durant is going to miss next season with an Achilles tendon tear and Klay suffered a knee injury.” Thompson’s injury will keep him out for part of 2019-2020.

Being proactive, Durant immediately had the surgery last Wednesday, performed by the Brooklyn Nets doctor, Martin O’Malley at the Hospital for Special Surgery here in Manhattan, two days after being injured to repair what has been diagnosed as a ruptured right Achilles tendon.

Durant dropped this message from his hospital bed to all of his Instagram followers. “What’s good everybody. I wanted to update you all: I did rupture my Achilles. Surgery was today and it was a success.” It accompanied a photo of him recuperating in a hospital bed.

Without Durant next season, Thompson out part of the season and Golden State’s ability to keep the nucleus of this team together and strengthen their reserves along with the changing face of the Western Conference, it’s questionable if the Warriors can return to the NBA finals for a sixth consecutive time.

“This five-year run’s been awesome, but I definitely don’t think it’s over,” said Curry.

“A lot of bad breaks in the finals,” noted Nurse. “Like us, they kept on playing. We just had to keep on playing no matter who was out there.” The Warriors did in the sixth game final series.

Game 6 had 9 ties and 18 lead changes, but it’s understood that there’s no game plan for injuries or suspensions. The Warriors front office will now join the other 29 teams fielding the right players to augment this team to maintain their post season consistency.