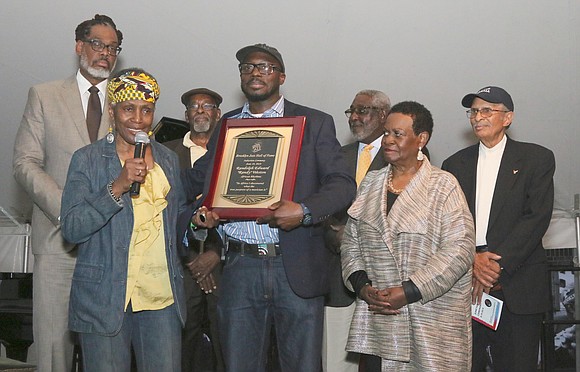 While Juneteenth was celebrated across the land, Central Brooklyn Jazz Consortium combined Juneteenth, their 20th anniversary, and Black Music Month by hosting a ceremony inducting the late jazz giant Randolph Edward “Randy” Weston into the Brooklyn Jazz Hall of Fame.

Brooklyn’s Bedford Stuyvesant Restoration Corporation was the venue for this event.

The damp, June weather did nothing to lessen the enthusiasm of the audience. Adorned in traditional African attire, Shanto’s Drum Procession led the overflow crowd from the main building to the tent area and conducted the libation, which pays homage to the ancestors. After the master of ceremonies, jazz vocalist Steve Cromity, laid out the evening’s program, the Emmanuel Baptist Church Jazz Vespers led off with “Lift Every Voice and Sing” and “You Are the Source of My Strength.” The rich, warm melodies set the tone for the remainder of the evening, reminding us of our shared culture.

A recent New School graduate, Gabrielle Garo, received the Deacon Leroy Applin Young Lioness Award. This ingénue is a multiinstrumentalist who plays flute, alto/soprano, tenor saxophones, piccolo and clarinet. Gabrielle has played with numerous renowned jazz greats such as Eddie Palmieri, Larry Harlow, Christian McBride and his Big Band, and more. She is the winner of the 2015 International Women in Jazz Youth in Action Award. All of this and she’s just begun. Look to see a lot more from this Young Lioness Gabrielle Garo.

It was very appropriate to follow this part of the program with the induction ceremony. Randy Weston has said, “In Africa I discovered what the true purpose of a musician is. We are historians, and it is our purpose to tell the people the true story of our past, and to extend a better vision of the future…We have a tree, at the root of which is African music with its infinite variety...But we are all part of the same tree, and we are all involved with each other in a continuing evolution.”

Randy Weston’s son, Niles Weston, was presented with a plaque inducting Randolph Edward “Randy” Weston, posthumously, into the Brooklyn Jazz Hall of Fame. Niles Weston expressed his appreciate for honoring his dad into the Hall of Fame.

Celebrating their 55th anniversary, Jazzmobile director, Robin Bell-Stevens, said she was honored to be a part of this annual celebration as it inducts the National Endowment for the Arts, Jazz Master and former “Jazzmobile artist” Randy Weston, into the Central Brooklyn Jazz Hall of Fame. Jazzmobile presented the music selection of the Jazzteenth Freedom Ensemble.

The executive director of RestorationART at the Billie Holiday Theatre, Dr. Indira Etwaroo, said that RestorationART is honored to join the Brooklyn Central Jazz Consortium in their deeply meaningful and pioneering work.

T.K. Blue, an alto saxophone/flutist who played with Randy Weston for over 35 years, highlighted the evening’s entertainment. We heard the Weston influence in much of T.K.’s music.

Percussionist Neil Clark played traditional drums and chanted a song in a tongue or language, which echoed Black lives before captivity. It was incredibly well done.

We were introduced to string and percussion instruments brought straight out of West Africa. Both were beautifully crafted. One of these instruments is a kora played by Muramadou Salieu Suso, master kora player and composer.

The after-dinner refreshments gave the gatherers an opportunity to catch up with friends, mingle with the musicians and share summer plans.

All in all, it was a fantastic evening.