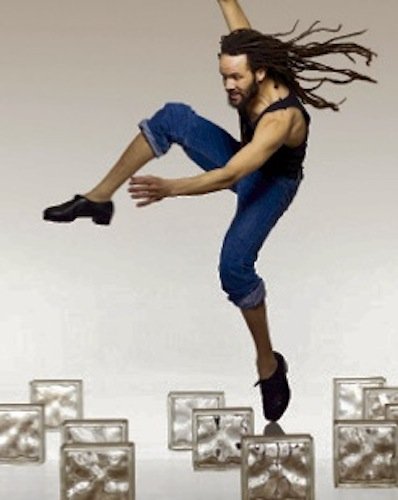 Since Berta is a jazz warrior, it is now a necessity to check him out Monday, her word counts. She knows this music and has been producing jazz in Harlem since 1993 at Birdland’s when it was on 105th Street before turning St. Nick’s Pub into a landmark jazz dynasty. Musicians, vocalists and spoken wordsmiths are welcome to sit in.

It is difficult to believe this year marks a milestone 35 years in show business for the brilliant tap dancer, choreographer, director and actor Savion Glover. He brings his extraordinary melodious footwork to The Joyce Theater with the world premiere of his innovative new work Lady5 @ Savion Glover’s BaRoQUe’BLaK TaP Café for a limited run from July 2 through July 7.

Inspired by an imaginary conversation between Savion Glover and the late tap dancer and choreographer, Gregg Burge, Lady5 @ Savion Glover’s BaRoQUe’BLaK TaP Café takes audiences inside of Glover’s visionary mind as he transforms the Joyce into a café using dance as a means to illustrate the evolution of thought and self- identity.

Integrating elements of theater, Lady 5 is divided into two parts with the first half of the show, entitled The BaRoQUE’Blak Sound, embodying baroque themes complete with elaborate styled costumes set to a soundtrack of traditional and classical music. In the second half, entitled The TaP Café Sound, the theme of the show shifts significantly as the costumes are shed and the music changes to more contemporary selections, reflecting, as Glover puts it, “the transition to becoming more ourselves and really getting into the tap.”

While being recognized for his award-winning choreography in the Broadway musical, “Shuffle Along,” Glover was recently presented the Trailblazer Award by The Jazz Gallery in New York City. He continues to focus on bringing attention to the art form of tap as an instrumental component with his astounding technique that places him in the unique position as a percussive jazz musician improvising everything from straight-ahead jazz to avant-garde and funk. His jazz reverence is most apparent during his engagements with such musicians as drummers Jack DeJohnette and Roy Haynes, pianist McCoy Tyner and recently drummer Marcus Gilmore.

In his hometown of Newark, New Jersey, Glover established The HooFeRzCLuB School For Tap as well as Savion Glover Productions, a production entity highlighting the tradition of tap dancing and sound.

There will be two shows July 6, 2 p.m. matinee and 8 p.m. evening performance.

Tickets start at $10! Call Joyce Charge at 212-242-0800 for $10 tickets. All other tickets can be purchased online via https://www.joyce.org/performances/savion-glover.

During the early 1940s Minton’s Playhouse was the jazz mecca of the world. The house band included pianist Thelonious Monk, trumpeter Joe Guy, bassist Nick Fenton and drummer Kenny Clarke. The pianist Mary Lou Williams noted, “There were more musicians online to get in than paying customers.”

Minton’s greatest fame will forever be its reputation as the home of Bebop where the legendary cutting edge cats Thelonious Monk, Bud Powell, Kenny Clarke, Charlie Christian, Charlie Parker and Dizzy Gillespie brewed-up a hard swinging, fast-paced music called Bebop that turned the jazz world on its ear. Minton’s thrived for three decades until its decline in the 1960s, and its eventual closing in 1974.

The famous jazz club (at 206 W. 118th Street, now a U.S. National Register of Historic Places) went through two brief openings to no avail until its 2013 revival as an upscale jazz club and restaurant. Despite the renovations and hoopla, the new generation of jazzsters never flocked to the storied walls with its spirited recollections of trumpet duels with Dizzy Gillespie and Roy Eldridge. The imitation of what was never came close to its former hipness, reputation or fame.

It seems a burst of sunshine is bringing Minton’s out of the shadows with the new partnership between Jazzmobile Inc. and Harlem Jazz Enterprises as they enter into an open-ended residency that will begin July 4 with pianist Nat Adderley Jr. and will continue every Thursday evening with live jazz.

Raphael Benavides of Minton’s Playhouse (a partner) stated, “As we continue to expand our programming, Thursday nights at Minton’s will be the place to be for jazz lovers from the area and around the world.”

Timothy Greenfield, Jazzmobile’s chairman of the board, said, “We are excited for this opportunity to expand our programming year-round, something the Jazzmobile audience has been requesting for years. We’re looking forward to presenting Jazzmobile artists as well as introducing new talent as a part of this residency at one of the world’s most renowned jazz venues.”