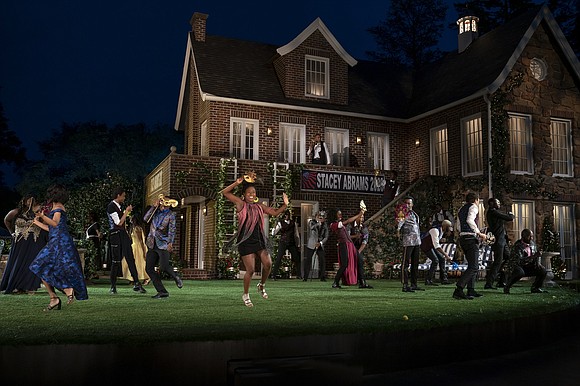 "Much Ado About Nothing" Joan Marcus photo

Talk about bringing Shakespeare into modern times and you are talking about Tony Award winning director, Kenny Leon, and “Much Ado About Nothing,” playing at the Delacorte Theatre in Central Park. Yes, playing at FREE Shakespeare in the Park, provided by the Public Theatre. Leon magnificently directs this production that features an all-Black cast bringing it into modern times utilizing a car, R&B soul songs and picket signs that protest war, hip-hop music and dance moves that definitely had some booty shaking going on, having members of the upper class dressed like members of a college marching band, inspiring gospel numbers that took the audience to church and touched the heart, and having Shakespeare’s words spoken, but done so with a “Sister-girl” and “Brother-man” type delivery.

You haven’t seen a party or wedding scene filled with gorgeous songs and hip-hop dance moves or numbers celebrating the gift of life and lifting up the ancestors as you do when you experience the delightful choreography of Camille A. Brown. She knows how to get the party started and get everyone feeling the music and the spirit of the dance. She was a perfect choice to choreograph this fantastically fascinating take on Shakespeare’s piece.

This production of “Much Ado About Nothing” is COOL and very funny. The characters are feisty and very amusing. It tells the story of Don Pedro returning from the war, but while this play was originally set in 1598, Leon sets it in 2020 and Don Pedro comes from Aragon, but it’s Aragon, Georgia. Don Pedro and his men, Claudio, Benedick and others are staying at the home of Leonato; Claudio loves Leonato’s daughter Hero and Don Pedro helps him to get engaged to her. Meanwhile Beatrice, a very independent, skilled person with words, continuously has a verbal back and forth with Benedick. The two love verbally exchanging insults and say they are not in love. A plot is devised to get them to fall in love and get married. Don Pedro has a brother named Don John who hates him and wants to destroy him in any way he can. He decides to ruin the upcoming marriage between Claudio and Hero by setting up a lie, which depicts her as being unchaste. What happens after that you will have to go to the theater to see. What I love the most about going to Shakespeare in the Park is that the Public always offers you a synopsis of the play in the playbill. After you see the production if there’s anything you didn’t understand you can always read what you just experienced.

“Much Ado About Nothing” is pure, magnificent theater at its best! There are quite a lot of comedic moments that will have you bent over laughing. This cast is absolutely a slice of heavenly theatrical pie and Leon has Beatrice not only acting on stage but coming out into the audience and sitting among everyone, at times, taking people’s seats and holding them. It was fun to witness and it made it even more fantastic that Beatrice is played by Danielle Brooks. Now let me introduce you to the rest of this stunning, superb cast that made everything look so easy and made everyone feel so relaxed and engaged. Tony Award winner Chuck Cooper plays Leonato; Billy Eugene Jones plays Don Pedro; Margaret Odette plays Hero; Grantham Coleman plays Benedick; Jeremie Harris plays Claudio; Tiffany Denise Hobbs plays Ursula; Olivia Washington plays Margaret; Daniel Croix Henderson plays Balthasar; James Lincoln Smith plays Barachioo; Erik Laray Harvey plays Antonio/Verges; Tyrone Mitchell Henderson plays Friar Francis/Sexton; Lateefah Holder plays Dogberry; Khiry Walker plays Conrade/Ensemble; Kai Heath plays Messenger; Hubert Point-Du Jour plays Don John; ensemble members include Jamar Brathwaite, Javen K. Crosby, Denzel Deangelo Fields, Tayler Harris and Jazmine Stewart; and dancers include Lawanda Hopkins, Williams Roberson and

“Much Ado About Nothing” is really quite a lot of ado about something marvelous! Make sure you have a chance to experience it!