Liberty unable to put together wins; stuck at 3–7 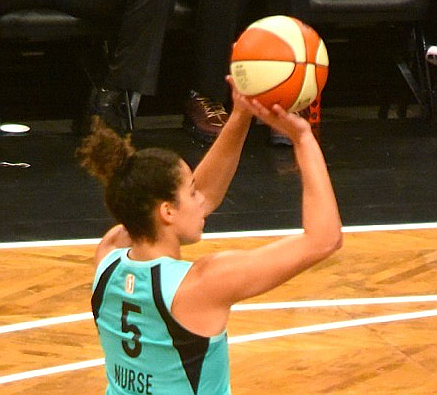 Tina Charles continues to be a fearless leader and superb player and Kia Nurse is having a first-rate sophomore season, but the New York Liberty are still unable to put together consecutive wins. The Liberty is heading into Friday’s Pride Night game against the Dallas Wings in need of a cohesive, productive game that gets them off the fringe and into the mix for 2019 WNBA season.

The Liberty followed a stellar road win over the Los Angeles Sparks on June 15 with an unfortunate home court 91–83 loss to the Chicago Sky. Newlyweds Courtney Vandersloot and Allie Quigley (the Sky teammates married in December 2018) showed their unity extends to the court as Vandersloot posted 25 points, eight rebounds and six assists while Quigley scored 13 and maintained a 100 percent free throw percentage.

“Tough one, battled, good energy, just too many easy opportunities on both ends that we didn’t take advantage of both defensively and offensively, and getting a couple more shots to fall,” said Liberty coach Katie Smith of the game.

Last Friday, it was announced that assistant coach Charmin Smith was leaving the team for a position at University of California, Berkeley. Previously associate head coach of the Golden Bears, Smith is returning in the head coach position following the departure of Lindsay Gottlieb, who was hired by the Cleveland Cavaliers as an assistant coach. While Smith’s impending departure leaves the Liberty short-handed on the coaching side, it’s great to see another woman of color earn a head coaching spot in Division I women’s basketball.

On Saturday, the Liberty took on the Minnesota Lynx in Minnesota. Despite leading by one point at the half, the Liberty could not hold on for the win. The decidedly short-handed Lynx—playing without Maya Moore (sitting out the season) and Seimone Augustus (currently injured)—still had the goods as rookie Napheesa Collier and veterans Sylvia Fowles, Odyssey Sims and Danielle Robinson all scored in double figures.

“You take every game the same way,” said Nurse. “Obviously, no matter what game you play everyone comes out differently. It’s obviously harder to play on another team’s home court as well, so just continuing to come out and be ourselves and execute our game plan.”

With no games since Saturday, June 22, the Liberty has had a few days to rest, regroup and practice for Friday’s game.