Bayard Rustin: the March on Washington and its ties to Harlem 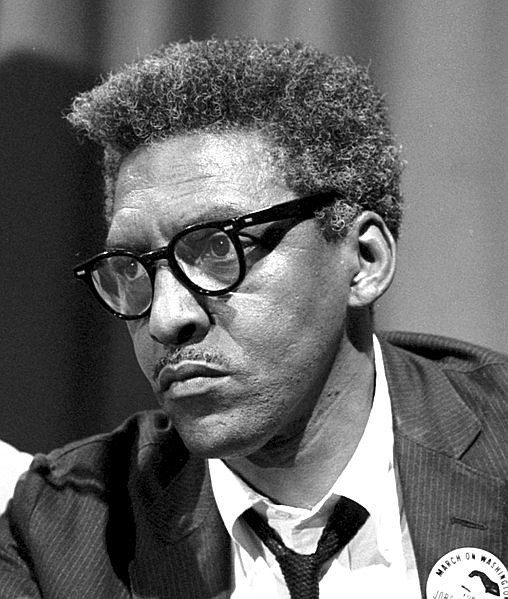 Several dyears ago, Louis Sharp called the Amsterdam News seeking assistance on a historical item. He was trying to verify something he remembered from his past.

In 1963, he was a volunteer working with Bayard Rustin, the key coordinator of that year’s March on Washington. He wanted to install a plaque in the Apollo Theater, where the headquarters of the march was located, but to do so, he needed proof that Rustin operated from this site.

A reporter at the AmNews was able to find two sources to show that Rustin indeed worked out of the Apollo, but he also worked out of Friendship Baptist Church on 130th Street, where the Rev. Thomas Kilgore was the pastor, and where James Kilgore, of no relation, is the current pastor.

“The offices were staffed by more than a hundred volunteers and paid workers,” wrote Jervis Anderson in his biography of the great leader “Troubles I’ve Seen.”

Now that Sharp, who doesn’t recall working at the church, has his proof, it’s a matter of getting the Apollo to accede to his wishes. If that doesn’t work, he should consider placing the plaque at the church. One of the most famous photos of Rustin at work, with a phone in one hand and a cigarette in the other, was taken at the church.

It was from this station that the irrepressible Rustin coordinated one of the largest demonstrations in U.S. history. Orchestrating the transportation alone—the hundreds of buses scheduled to descend upon the nation’s capital—was enough to exasperate the most inexhaustible worker.

But this was nothing for the tireless Rustin, who, as A. Philip Randolph’s right-hand man, was also significantly involved in the threatened March on Washington in 1941, one in which President Franklin D. Roosevelt surrendered to with the promise to end racial discrimination, particularly in plants so important in the manufacture of military weapons and material.

Aug. 28, 1963, was clearly a glorious day in the life of Dr. Martin Luther King and Randolph. “As the thousands dispersed—there were a quarter of million in attendance—from the Lincoln Memorial, singing ‘We Shall Overcome,’ Rustin saw Randolph standing alone at a deserted end of the platform. He walked over and put an arm around the old man.” Anderson recounted. “I could see he was tired,” Rustin once recalled, according to Anderson. Rustin continued: “I said to him, ‘Mister Randolph, it seems that your dream has come true.’ And when I looked into his eyes, tears were streaming down his cheeks. It was the one time I can recall that he could not hold back his feelings.’”

Yes, it was a grand moment for Randolph and King, but we should not ignore the vital role Rustin played in bringing this enormous affair together. It was also sad that King had succumbed earlier to pressure from Adam Clayton Powell Jr.’s threat to expose Rustin’s homosexuality if his presence at the march wasn’t minimized.

Rustin may have been shoved out of the spotlight, but that was never a problem for him. Though he was a fantastic speaker and performer, he was just as comfortable and competent behind the scenes, and this is something that Randolph recognized and deeply appreciated.

Thousands gathered again to commemorate the 50th anniversary of that great day in 2013, and as they assemble, let us hope that a moment was taken to pay homage to Bayard Rustin in the same way that Louis Sharp tried to in his own determined way.