When St. Jude opened in 1962, Danny Thomas vowed the hospital would treat patients regardless of race, religion or ability to pay. Dr. Rudolph Jackson was the first black doctor at St. Jude. 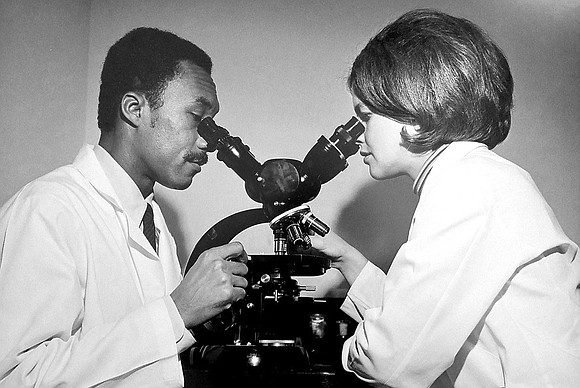 While he was finishing his training in Philadelphia, Dr. Rudolph Jackson fielded an offer to move 1,000 miles and begin practicing at a fledgling, low-paying hospital in the South where he would be the first black physician. Suffice it to say he had some reservations.

As Jackson later put it, in the most understated of ways, “A lot of things were going on down there.”

Then there was the matter of salary. St. Jude Children’s Research Hospital, which had opened just six years earlier, would pay Jackson $18,000 annually — a modest sum for a doctor even back then.

“When I came down there and I told people how much money I was going to make, they kind of laughed at me and asked, ‘Why are you going down there?’”

Ultimately, Jackson cast his doubts aside and accepted the offer from Dr. Donald Pinkel, St. Jude’s first medical director. He arrived in August 1968 and began treating children for leukemia, solid tumors, sickle cell disease and “any other strange and out-of-way problems,” he recalls.

Over the next four years, Jackson witnessed and took part in new therapies that produced major advances in the battle against cancer and other life-threatening diseases. He saw treatments that had been refined and tested at St. Jude copied by institutions around the world.

Amid the frenetic pace of change, Jackson gave less thought than one might imagine to his distinction as St. Jude’s first African-American doctor. “At the time it didn’t mean perhaps as much as later on,” he said.

In an era when segregated hospitals and clinics were the norms across the South and parts of the North, founder Danny Thomas promised St. Jude would be different. Patients of all races would be admitted and treated in the same rooms. African-Americans would be hired not just as service employees, but as researchers, doctors and nurses.

Born in Richmond, Virginia, and educated at Morehouse College in Atlanta and Meharry Medical College in Nashville, Jackson arrived at St. Jude at a time when doctors generally did not have the luxury of specializing in the treatment of one kind of cancer or another disease. “We did everything,” he recalled.

An early target of St. Jude was acute lymphoblastic leukemia, the most common childhood cancer, which in the early 1960s was killing some 96 percent of the kids who were diagnosed with it. By the time Jackson got to the hospital, St. Jude was beginning to enjoy success treating ALL.

“There was a great deal of progress, which we all participated in. We were getting patients who would probably have not made it or only made it for 18 to 20 months or so. But then we started taking these patients through age 30 and after that, my goodness…,” he said. “That was fantastic.”

In the 1960s, however, far more common health problems than cancer threatened children, especially those in low-income households. To deal with rampant anemia, parasitic infections and growth impairments, Jackson developed a program under which St. Jude enrolled thousands of local infants and mothers to receive nutritional assistance, medicine and even diapers. The program served as a prototype for WIC, the federal initiative for women, infants and children.

It also was in the treatment of sickle cell disease that Jackson left a lasting mark. He had run a sickle cell program in Philadelphia, and at St. Jude, he ventured into neighborhoods of Memphis to enhance the education and treatment of children and families affected by the debilitating, painful and often deadly disease.

Jackson eventually built the program to such a stature that in the early 1970s, the NIH hired him to head the federal government’s efforts to fight the disease.

Now 83, a retired Jackson lives in Atlanta. In hindsight, he is happy he took the risk and accepted Dr. Pinkel’s offer to come work at St. Jude.

“As I look back, that was one of the best things that ever could’ve occurred.”