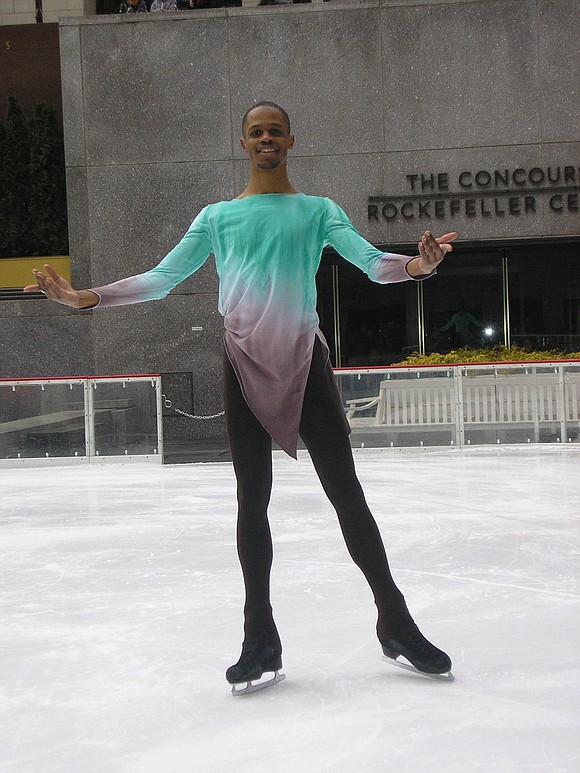 Ice Theatre of New York led off its 2019 City Skate Concert Series last week at the rink at Rockefeller Center. Among the pieces performed was the debut of “Presence,” which was skated by Theron “T.J.” James and choreographed by Deneane Richburg, a skating and dance choreographer and founder of Brownbody, a company that combines modern dance, theater, social justice practice and skating.

“This piece is about presence and the idea of what that means. What does it mean to be in a space, to self-affirm, to get externally affirmed on multiple levels—physically, emotionally and spiritually? For a lot of African-Americans, we have not had that,” said Richburg, who worked with James for about a week and a half on the program. He learned the choreography in about two days, and they spent the rest of the time focused on the intent of the piece.

Richburg is a former competitive skater who earned a master’s degree in dance at Temple University. Her master’s thesis was set on the ice. Through that she met the late Alyssa Stith, to whose memory last week’s ice concert was dedicated.

“T.J. did an amazing job,” said Richburg, who used music from the Academy Award-winning film “Moonlight” for “Presence,” feeling it reflected her vision for the program. “We talked a lot about what the story is, what is behind the movement. Using the process of diving deep internally to inform the performance. By affirming one’s presence, we start to begin to heal from that level of voicelessness and being shut out.”

Performing “Presence” was deeply moving for James, a former competitive skater at the national level who has been skating professionally for about a decade in shows such as “Disney on Ice,” “Holiday on Ice” and Royal Caribbean International cruise ship shows. This was his first time performing at Rockefeller Center.

“It was very inspiring for me to be out there, especially for Black History Month,” he said. “To represent an entire community with my story in a pair of ice skates is exciting.”

Being the first person to perform “Presence” was deeply meaningful to James. “To represent a body of people in an expression of my own self in a public forum speaks volumes,” he related. “It means a lot to me to be able to stand tall.”