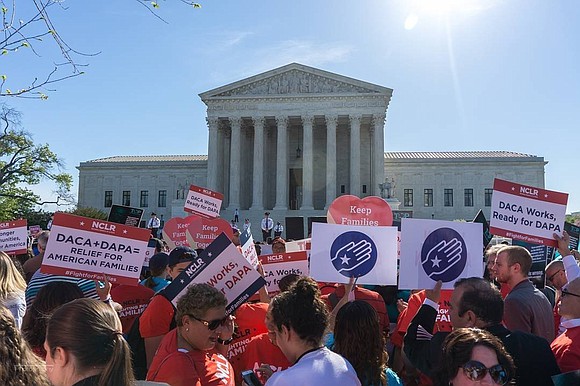 (File Photo) President Donald Trump is expected to end a program that protected undocumented immigrants who came to the United States as children -- so-called "Dreamers" -- from deportation, four sources familiar with the decision told CNN. Two of the sources said the plan is to have a six-month delay in any action regarding the Deferred Action for Childhood Arrivals (DACA) program. Erik Cox/Instagram

Union leaders want Congress to make protections for TPS holders and Dreamers permanent and won’t stop lobbying on their behalf.

More than 30 national unions and labor institutions sent a letter to Washington, D.C., urging Congress to stand by TPSers and Dreamers.

The letter stated, “As labor organizations representing millions of workers in the U.S., we urge you to renew Temporary Protected Status (TPS) designations and pass legislation in the U.S. House of Representatives as soon as possible, but no later than the first 100 days of the 116th Congress, to provide permanent protection and a path to citizenship for Dreamers and individuals with TPS or Deferred Enforced Departure (DED).”

Labor leaders were quick to announce they stood by the letter and hoped Congress would do right by them.

“For the labor movement, these programs have been vital in ensuring that thousands of working people have rights on the job and the freedom to negotiate together for fair pay and working conditions,” stated AFL-CIO President Richard Trumka. “It is long past due that all members of Congress work together to immediately pass immigration legislation that will give Temporary Protected Status and Deferred Action for Childhood Arrivals recipients a pathway to citizenship.”

At the end of February, President Donald Trump’s administration extended TPS for U.S. residents from Sudan, El Salvador, Haiti and Nicaragua through Jan. 2, 2020. The U.S. government grants TPS to citizens of countries that are war-torn or suffering from a natural disaster. They’re able to work in the U.S. until the government deems their home countries safe enough for them to return.

“Our country’s immigration system is broken, and the government’s inability to fix it is continuing to cause uncertainty for families across the country,” stated López. “This bill is an important step toward providing stability for so many who have already passed background checks, pay taxes, go to school and work hard every day to build a better America. They work side by side with us, live in our communities, and are dedicated members of our union family and countless others. We can and must do better.”

“While we certainly welcome the extension of TPS until January 2020, this minor victory was only won because immigrants and advocates stood up to prevent this Trump administration’s utterly immoral and irrational attempt to turn hundreds of thousands of legal, productive residents into fodder for deportation,” added 32BJ SEIU President Hector Figueroa in a statement.

Last fall, the U.S. District Court for the Northern District of California ruled against the U.S. Department of Homeland Security implementing and enforcing the termination of Temporary Protected Status for Sudan, Nicaragua, Haiti and El Salvador. According to DHS officials, on Oct. 31, 2018, the agency published a Federal Register Notice describing the steps they were taking to comply with the court’s order. These steps included the automatic extension through April 2, 2019, “of the validity of certain specified documents to allow eligible TPS Sudan beneficiaries to demonstrate their lawful status and employment authorization: Employment Authorization Document, Form I-94, Arrival/Departure Record, and Form I-797, Notice of Action, collectively TPS-related documentation.” Activists and labor leaders accused the administration of trying to oust people from Central America, Africa and other non-European nations out of the country.

“Immigrant workers are the backbone of the American hospitality industry, and the thousands of UNITE HERE workers on TPS and DACA are irreplaceable members of their families, communities and workforces all across the country,” stated Taylor. “UNITE HERE is a long time leader in the labor movement for immigrant justice, and we are proud to join with the rest of the American labor movement today in backing this urgently needed legislation. Neither our industry nor our country could sustain losing the tremendous value and strength brought to both by dedicated, long term TPS and DACA employees.”