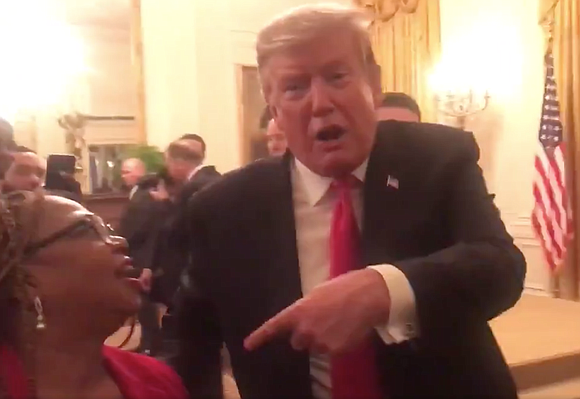 Frederick Douglass Houses Tenant Association President Carmen Quiñones met with President Donald Trump, First Lady Melania Trump and Vice President Mike Pence in February. Topics of the discussion included the horrendous conditions she and other tenants are facing in public housing and the urgency for help.

“I spent 20 minutes with the vice president and told him, ‘What do we have to do to get this done,’” Quiñones said during a recent interview. “The president was very adamant about helping and the First Lady promised she would come meet with the parents and children about the lead.”

However, fast forward one month later, and it appears Quiñones may have buyer’s remorse and isn’t too pleased about the recent news over Trump’s proposed cuts to public housing nationally that could see increased rents for New York City Housing Authority residents and the elimination of capital funding.

Trump’s proposed $4.7 trillion 2020 budget would give nearly nothing to public housing to free up funds for the $8.6 billion he wants for his campaign-promised wall at the southern border. The public housing operating fund could be slashed by 37 percent.

Fears among people living in the nation’s largest public housing system appear to be coming true as the federal government inches its way into New York City Housing Authority. While rumors range from the feds putting money into fixing NYCHA, possible privatization and/or a full-blown shutdown, shelling out more for rent is a topic of discussion.

According to the 35-page budget brief released by the U.S Department of Housing and Urban Development Secretary Ben Carson, public housing would see a 16.4 percent cut in funding and increased rent for those able to work. NYCHA would not see any money from the federal government for long overdue repairs. The budget has to be passed by Congress to be official.

“In addition, the budget proposes uniform work requirements for work-able households. Consistent with administration policy, the requirement would allow for work-seeking activities and would exempt the elderly, the disabled, those caring for a disabled family member or small child, and pregnant women,” the brief outlines.

He stated, “This budget allows HUD to focus on a more holistic approach to bring together the public sector, private sector and nonprofit community. These partnerships are key to developing the skills and talents of our residents—with the goal of promoting family self-sufficiency and a life beyond public assistance.”

As HUD administrator for New York and New Jersey, Lynne Patton goes into her fourth week of living in various NYCHA developments. She lauded Trump’s 52 percent increase to public housing last year. The increase happened after congressional members didn’t approve initial cuts to public housing. Patton has been living in NYCHA over the past month to better understand the issues facing residents.

“I’ve only been in politics for two years, yet even I know that it’s not uncommon for presidents on both sides of the aisle to propose cuts in various programs to leverage funding for others,” she said. “The only budget that matters is the final one signed by a sitting president.”

As expected, local officials are pushing back against the idea of cutting federal funding to NYCHA. NYCHA Interim Chair and CEO Kathryn Garcia said the president is in for a fight.

“Once again, President Trump has demonstrated his intention to walk away from the federal government’s responsibility to support public housing,” Garcia said. “We have fought these draconian cuts before, with support from Senator Schumer and our Congressional delegation, and we will fight them again. We will not stand by as the federal government tries to abandon the hundreds of thousands of New Yorkers who rely on this funding.”

Mayor Bill de Blasio is in the chorus of local Democrats who say they plan to stop the cuts and rent increases. In a tweet, de Blasio said the budget proposed by Trump and HUD would be detrimental to NYCHA residents.

“While we’re fighting to turn public housing around, @realDonaldTrump just proposed a budget that would hike rents and gut repair funding for 400,000 New Yorkers living in @NYCHA,” he said. “We can’t—and WON’T—let this happen.”

NYCHA is in need of a reported $32 billion in repairs. Last year, the city reached a $2 billion settlement with the federal government to repair the public housing over the next 10 years. A judge ordered the installment of a federal monitor.