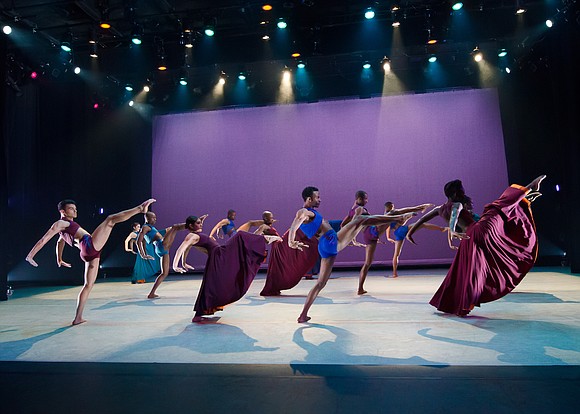 Ailey II’s season at the NYU Skirball Center, March 13-17 continues the fun, festive celebration of Alvin Ailey’s 60-year legacy that the Alvin Ailey American Dance Theater kicked off last year. And, as with the recent Alvin Ailey American Dance Theater season, it will allow us to applaud and honor the artistry, talent and staying-power of a cultural institution that is the brainchild of an artistic genius, a groundbreaking phenomenon and an awe-inspiring platform for talented dancers and choreographers.

When the curtain goes up on Ailey II at the Skirball Center, those of us who know that “there’s nothing like an evening spent with Ailey II” will be able to bask in the glow of its infectious energy and exhilarating talent while also celebrating the brilliant vision that became a reality in 1974.

Recently, speaking to the Amsterdam News about the upcoming season, Powell was clearly excited. Though he has settled into his position, Powell still holds the distinction of being the second artistic director in Ailey II’s history having been hand-picked in 2012 by Artistic Director Emerita Sylvia Waters when she passed the baton after 38 years at the helm. Powell still treasures his relationship with Waters calling it “a blessing. She’s a great mentor. I continue to talk to her.”

Now, giving a platform to countless other choreographers over the years, this season the program will include the first work Powell has created on Ailey II since becoming artistic director. Entitled “Ebb and Flow” and set to Samuel Barber’s “Adagio for Strings,” the piece is an emotional duet inspired by his love of water. “I wanted to do something that not only talked about love but reflected the ebb and flow of the ocean and the calm before the storm.”

Other new additions to the repertory include Battle’s “Flock,” a work created in 2004 and set to Evelyn Glennie’s percussive score. It’s a work that highlights the tension and conflict among a community of believers and their charismatic, but flawed, leader. Uri Sands’ “Tracks” is a unique work by this former Ailey dancer that highlights the collaborative nature of choreography. Powell says, Sands began by asking dancers where they saw themselves in relation to what’s happening in the world and used their connection to the social, political and economic environment as a jumping off point drawing on a treasure trove of personal stories. South African born Bradley Shelver’s “Where There are Tongues” “really talks about his journey and the joy of being part of the Ailey family,” Powell says. “When I was in the company back in ’96-97, we traveled to South Africa and Bradley was one of the talented students Ms. Judith Jamison and I met in a master class. Bradley was offered a scholarship and after a couple of years he was dancing with Ailey II, eventually became resident choreographer. At its core, Shelver’s work is about community and what we can achieve when we support one another.”

In many ways the sense of community seems to be an underlying theme of the Ailey II season. It’s there in the spirit one feels as a member of the audience or the coherence that emanates from the dancers on stage. It shines through whether Ailey II dancers are performing new additions to the company’s repertory or offering powerful explorations of returning favorites, like Darrell Grand Moultrie’s “Road To One,” Juel D. Lane’s “Touch & Agree” and Renee I. McDonald’s “Breaking Point.” That sense of community envelops the theater creating an ambience that always makes attending Ailey II performances a uniquely gratifying experience and reinforcing the observation that there is nothing like an evening spent with Ailey II.