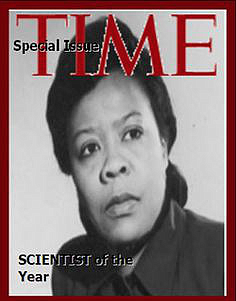 Any discussion with Imhotep Gary Byrd is multidirectional with conversations about current events, political developments, and African-American history and culture. He is always wary of the calendar, particularly in his column that appears in this paper, and Women’s History Month is one that he relishes. The talk was enough to remind me that perhaps I could devote the rest of the month to Black women and, of course, he had several on his agenda, including Aretha Franklin.

To this end, I began searching my mind and internet for a notable but neglected Black woman from Buffalo, Imhotep’s hometown. I am not sure why Marie Van Brittan Brown was listed on a Buffalo website, but her name caught my eye and since my literary agent is Marie Brown, this was a perfect fit for my pursuit.

Chances are you’ve never heard of the former Ms. Brown, but as an inventor she paved the way for the various advances today in home and business security.

Before getting to her genius, we should note that she was born on Oct. 10, 1922, in Jamaica, Queens (she died Feb. 2, 1999, in Queens). Her family originated in Pennsylvania and Marie worked as a nurse while her husband, Albert Brown, was an electronics technician. It was impossible to find information about her early life, or about her devotion to her nursing career. She enters our pages with her need for security since her husband was often away from home and she lived in a neighborhood with a high crime rate.

The couple combined their ingenuity to safeguard Marie by building a security system that was a fixed set of four peep-holes with a camera that would move up and down, thereby allowing her to view and identify people of different heights. In other words, she was able to see exactly what the monitor revealed.

The invention also allowed her to remotely unlatch the door for an expected visitor. They filed for a patent on Aug. 1, 1966 for their “Home Security System Utilizing Television Surveillance” as it was titled. The application was approved three years later, and opened the gateway to closed-circuit television or CCTV. The system brought her national recognition and honors, including an award from the National Scientists Committee. It also paved the way for other security systems that use video, push-button triggers, remote-controlled door locks, and alarm devices to contact the police and security companies.

Today, her invention is still widely used by small businesses, offices, homes and a variety of institutions. As recently as 2013, a dozen or more inventors have cited her invention and have extended her pioneering work.

Currently, her invention has boosted the home security market to be valued, in the next few years, at over $47.5 billion. Unfortunately, the Browns never seemed to be as interested in the commercial end of the invention as they were in securing homes and businesses. A woman alone and fearing intruders led to a billion dollar enterprise, and merely by pushing a button she could see who was at the door and how to respond.

Below you can find a graphic depiction of how her invention worked, which appeared with the patent application. And according to one report, the couple planned to install one of the systems in their own home. Any homeowner or business today with a video monitor and security personnel knows how the system operates. It all sounds rather simple, but it took the insight and technical skills of the Browns to make it a reality.