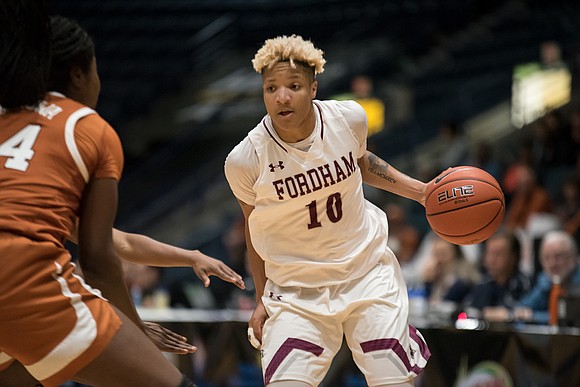 They’re celebrating in the Bronx. Sunday, Fordham University women’s basketball won the Atlantic 10 Championship with a 62–47 victory over Virginia Commonwealth University. The win brings Fordham its third-ever trip to the NCAA Division I Women’s Basketball Tournament, the second under head coach Stephanie Gaitley.

Redshirt sophomore Bre Cavanaugh scored a game-high 22 points in the title game. She has led Fordham in scoring all season and played a significant role in the Rams’ overall success, which also included a share of the team’s first-ever Atlantic 10 regular season title. Both Cavanaugh and senior forward Mary Goulding were named to the Atlantic 10 All-Championship Team.

“Right now, everyone is finding their strengths,” said Cavanaugh, a 5-foot-8 guard from New Jersey who is averaging 17.3 points, 6.4 rebounds and 2.5 assists for the season. “This past stretch we’ve been on a winning streak [now at 12 games] and everyone has stepped up and contributed big time.”

Although Cavanaugh is in only her second year of playing, this is her fourth year as a college student. She spent her academic freshman year at University of California, where she sat out the entire season due to a concussion injury. After transferring to Fordham, she sat out the next season due to NCAA transfer rules. Since finally getting on the court, Cavanaugh has played with intent and purpose.

“One of the great things is there’s still room for improvement and with two years left there’s still a lot of growth I need to do in order to be the best I can be,” said Cavanaugh. “Two more years, that’s kind of dangerous.”

An international studies major with a minor in Chinese—she learned French and Spanish in high school—Cavanaugh is on track to complete her bachelor’s degree in December. Spring 2020, she’ll begin a master’s program in international studies. Her long-term career goal after basketball is to join the FBI. She got to attend the Atlantic 10 Student-Athlete Leadership Summit last fall, where she learned from former collegiate and NBA championship coach Kevin Eastman.

“One the main reasons I chose Fordham is the whole family aspect,” said Cavanaugh. “It’s a small campus. Everyone is together.”

She added, “Every once in a while I look back at those [summit] notes and see what I can do.”

Fordham will find out its first-round Tournament opponent on March 18.