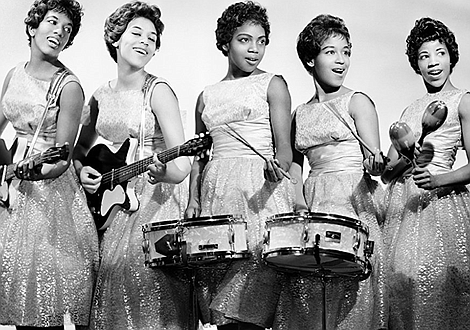 On Friday, April 5, 2019, at 4 p.m., the famed ’50s female group The Chantels will receive a commemorative street sign at the corner of West 166th Street and Prospect Avenue in the Bronx—right in front of St. Anthony of Padua’s Catholic Church where the girls began. The sign will read “The Chantels—Hit record ‘Maybe’ 1958.” The group is also celebrating their 60th anniversary in the music industry. Today they are still singing around the United States, and will appear at the Doo-Wop Show April 6 at Hauppauge High School in Long Island, N.Y.

“I am very excited and feel that the parish community is privileged to host such a special event for the South Bronx,” said the Rev. Father Joseph A. Espaillat of St. Anthony of Padua. “It will be a glorious day. Welcome home Chantels.”

Free and open to the public, the unveiling event will honor the original members: Arlene Smith, Jacqueline Landry Jackson (who passed in 1997), Lois Harris Powell, Sonia Goring Wilson and Renee Minus White, and newest group member Neomi Ortiz Brink. Bronx District 17 Councilmember the Hon. Rafael Salamanca, and John Dudley, district manager (Bronx community Board 3) will be on hand. There will be a reading of the proclamation, declaring April 5 The Chantels Day in the Bronx, N.Y.

The Chantels became a group after the original members began singing together in the church choir while attending St. Anthony of Padua’s church and grammar school in the mid-1950s. With a different and distinctive sound, the five young ladies formed the group and were inspired by the birth of the ’50s R&B era. They were discovered on Broadway by Richard Barrett, and their name derived from St. Francis de Chantal, another grammar school in the Bronx where the girls had played and won a basketball game. The group’s signature song, “Maybe,” featured Arlene Smith on lead and the beautiful harmony of the four other original Chantels. Other hits included “The Plea,” “He’s Gone,” and “I Love You So.” After Smith left the group in 1959 to pursue a solo career, The Chantels recorded “Look In My Eyes,” in the ’60s with Annette Smith on lead.

Organized by Beverly Lindsay-Johnson of Kendall Research and Entertainment, Clyde Frazier Sr. of the Frederick Samuel Foundation of NYC and musical director Hal Keshner, The Chantels’ street sign unveiling event will be followed by a musical program at St. Anthony of Padua’s auditorium (832 E. 166 St.) immediately after the unveiling. Guests will include John Clemente, author of the book “Girl Groups: Fabulous Females Who Rocked the World.” Two other New York girls’ singing groups of the ’50s era, The Cookies and The Toys, will perform songs recorded by The Chantels, and the program will conclude with the Chantels performing their hit song “Maybe.” The unveiling and program are free and open to the public. Seats are limited.

Note: Renee Minus White is the author of “Maybe: My Memoirs. A true story about the history of the group & experiences of one original member of The Chantels.” She still sings with the group 60 years later. The book is available at Amazon, Barnes & Noble, Google, Kindle and Dorrance/Rosedog Bookstore; call 1-800-788-7654.