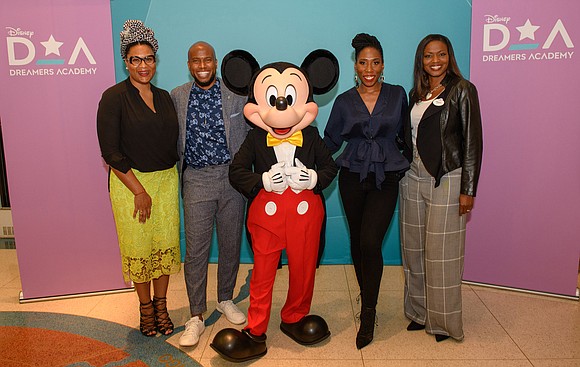 The teens, along with a parent or guardian, received an all-expense-paid trip to Walt Disney World Resort, where they will take part in a once-in-a-lifetime educational and mentoring program designed to inspire them to dream big, discover a world of possibilities and prepare for their future.

This year’s winners from the New York-metro area include Tori Manuel from Brooklyn; Meril Mousoom from Jamaica, Queens; Aileen Nieto Martinez from the Bronx; Alison Parish from the Bronx; Emmanuel Lee from Teaneck, N.J.; Andrew Coates from Orange, N.J.; and Avaneque Pennant from Hollis, Queens.

They are part of a group of 100 students from across the nation attending the four-day event where they’ll learn important skills such as communication techniques and networking strategies, and build confidence.

Students were selected from nearly a thousand applicants who answered a series of essay questions about their personal stories, the people who are most influential in their lives and their dreams for the future.

“Having a dream is one of the most important things in life. My success is a direct result of dreaming big,” said Harvey. “It is my passion to help others dream bigger and to give them the tools to achieve those dreams. That is why I enjoy partnering with Disney on this program every year.”

Each year, motivational speakers, celebrities, entrepreneurs, executives and Disney cast members gather at Disney Dreamers Academy to share their stories and provide insight on charting a positive course and achievement.

“These students are in for a life-changing experience,” said Tracey D. Powell, Walt Disney World Resort vice president and Disney Dreamers Academy executive champion. “Our goal is to help them see the unlimited possibilities and to inspire them to achieve their full purpose—to become the heroes of their own stories.”

“We have a remarkable group of students attending this year,” said Ebanks. “At ESSENCE, we embrace the mission of inspiring the next generation of leaders, and we’re looking forward to partnering with Disney once again to cultivate greatness in the 2019 class.”