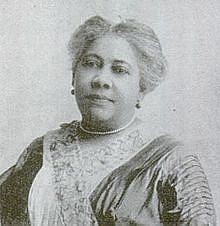 Well, Imhotep Gary Byrd, I have a most prestigious Black woman with roots in Buffalo, N.Y., that many Americans may not know much about but who provides an important link from the late 19th to the early 20th century, particularly within the realm of social and political activism.

If geography is fate, then Mary Burnett, born Sept. 18, 1866, in Oberlin, Ohio, was blessed with activist impulses from the very start of life, given the city’s history of anti-slavery and abolitionist movements. Burnett received a full dose of the community’s heritage as a graduate of the city’s high school and college where she earned a literary degree at age 19 in 1886.

When a teaching position was offered at Bethel University in Little Rock, Ark., she accepted and this placed her in a prime position to begin her fight against Jim Crow and segregation. She was only a year in town before becoming the first African-American woman to be an assistant principal of Little Rock High School. Four years later she married William Talbert, an affluent businessman from Buffalo.

It wasn’t too long after that she resigned her position in Little Rock and moved with her husband to Buffalo, where a year later she gave birth to their only child, Sarah May Talbert.

As she had done in Little Rock, Burnett immediately established herself in leadership roles in both civic and public affairs. She was a founding member of the Phyllis Wheatley Club of Colored Women, Buffalo’s first affiliate of the National Association of Colored Women, in 1899. When W.E.B Du Bois began organizing the Niagara Movement, Burnett’s house and dining room table were the host of the organization’s first meeting. Thus, she was one of the few women at the very inception of the Movement that later evolved into the NAACP, where she was again among the female forerunners.

In 1916, Burnett was elected the sixth president of NACW and the vice president of the NAACP. A year later she became one of the first Black Red Cross nurses to serve on the Western Front of Europe after the U.S. entered World War I. Like many African-Americans who experienced Europe during the war, she returned there and continued her commitment in raising the importance of race relations and women’s rights, a veritable unflagging suffragette.

At this time, one of the pressing social issues was the brutal wave of lynching in America, so much so that in 1919 Missouri Rep. Leonidas Dyer introduced an anti-lynching bill. Naturally Burnett was among the leading proponents helping to give the bill the needed traction.

Two years later, along with her unwavering commitment to supporting the Dyer bill, Burnett ventured abroad to the Fifth Congress of the International Council of Women held in Christiana, Norway. She was the first African-American delegate and noted in her address that “the greatness of nations is shown by their strict regard for human rights, rigid enforcement of the law without bias, and just administration of the affairs of life.”

In 1922, Burnett became the first African-American woman to win the NAACP’s Spingarn Medal, emblematic of her undying dedication to civil and human rights. She was a prime mover in the founding of the Anti-lynching Crusaders, which would spearhead the effort of the NAACP to enlist a million women to raise $1 million.

“Within three months,” wrote Paula Giddings in her book “When and Where I Enter,” “the Crusaders grew in number from sixteen volunteers to 900. They assigned directors in each state, and appointed ‘key’ women in towns and cities to act as coordinators. Among those the Crusaders attempted to proselytize were white women.” Giddings quoted Burnett on the Crusaders’ attempt to bring white women into the initiative. “This is the first time in the history of colored women that they have turned to their sister white organizations and asked for moral and financial support,” Burnett asserted.

“We have never failed you in any cause that has come us,” Burnett continued, “and we do not believe you will fail us now.” In response to her plea, Giddings wrote, “About 900 white women reformers did lend their names to the cause, but Black women would soon see that their ‘sister’ organizations could only go so far and no farther. Little substantive support ever materialized for it from white female reformers.”

As president of the NACW Burnett was instrumental in the purchase and restoration of the Frederick Douglass home in Anacostia, Md. Consequently, she was elected the president for life of the Frederick Douglass Memorial and Historical Association. Again Giddings is observant on this issue, noting the significant role of the NACW and its president in rescuing the landmark. “We realize today is the psychological moment for us women to show our true worth and prove that Negro women of today measure up to those sainted women of our race, who passed through the fire of slavery and its galling remembrance.”

This announcement bore the earmarks of the woman who made them. Mary Burnett Talbert died in Buffalo Oct. 15, 1923, at the age of 57.