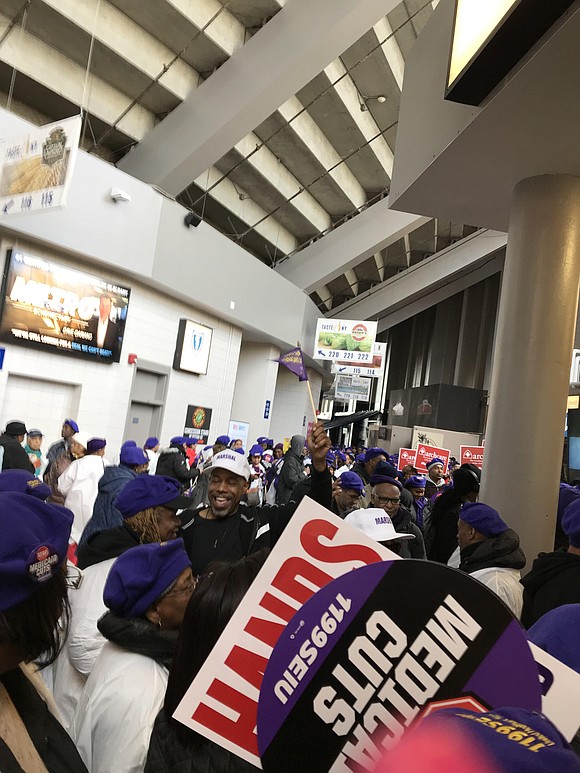 Union President George Gresham, 1199s and thousands of activists drove up to Albany to protest the budget cut to Medicare. ANTIONIETTE DONGN PHOTO

Funding for Medicaid, SNAP and even education are on the chopping block and New Yorkers could feel the brunt of President Donald Trump’s proposed FY20 budget. These draconian proposals have politicos and activists alike responding with outrage and action.

“Trump hopes to keep his campaign promise and is asking for $8.7 billion to fund his wall on the southern border to deal with the ‘immigration crisis,’” Congressman Hakeem Jeffries said. “Trump introduced his budget this week. He proposed approximately $2 trillion in cuts to Medicare, Medicaid and Social Security. They want to inflict cruel and unusual punishment on everyday Americans.”

Gov. Andrew Cuomo is one of several Democrats standing on the front line to block the $4.7 trillion budget, which has already caused shockwaves over slashing 37 percent to the public housing operating fund.

Last week Cuomo announced that the Division of the Budget has conducted a preliminary analysis outlining the impact the budget would have on the Empire State. Highlights include cutting $4.3 billion in health care funding for New York in the first year alone leading to a 20 percent reduction in federal health care funding.

The governor said that cuts could jeopardize safety net hospitals and put the health care coverage of hundreds of thousands of New Yorkers at risk.

“The president’s budget is another devastating assault on New York and our values that threatens to unravel the progress we have made ensuring fiscal responsibility, strengthening health care and delivering for New Yorkers,” Cuomo said. “While some people say this budget is just a marker to open negotiations, after the Trump administration passed the SALT cap that specifically targets New York, we take it as seriously as a heart attack.”

Cuomo added that he plans to do everything in his power, working with the state congressional delegation, to prevent what he calls the “draconian cuts.”

“President Trump’s budget for fiscal year 2020 is deeply troubling and makes it abundantly clear he isn’t serious about addressing the needs of the African-American community,” said Congressional Black Caucus Chair Representative Karen Bass. “If we didn’t already know what African-Americans stood to lose under a Trump presidency, this budget makes it abundantly clear.”

“President Trump’s budget makes it clear that Washington is no longer working on behalf of everyday Americans like the people I represent,” said State Sen. Brian Benjamin. “He is proposing cuts to healthcare, education funding, and housing that would affect the most vulnerable among us, and which would impact institutions near and dear to my community, like Harlem Hospital, while his allies are being given tax breaks and corporate welfare.”

According to the National Committee to Preserve Social Security and Medicare (NCPSSM), 5.7 million Medicare beneficiaries are African-American. Blacks, who make up the third largest racial/ethnic group in the United States, are likely to have more chronic or serious health conditions and have significantly lower financial resources than white Americans.

“The tax cuts for the wealthy, the failure to allow Medicare to negotiate drug prices and another budget that pushes more seniors over a financial cliff shows that this administration is not plugged-in to the realities of being elderly in America,” said NCPSSM President and CEO Max Richtman.

However, health care isn’t the only thing that’s in danger. SNAP benefits (food stamps) could take a hit with a $220 billion slash over the next 10 years for the 2.7 million New Yorkers who use it. Similar to cuts to public housing, SNAP would implement stricter work requirements and restructure the delivery of benefits.

On Tuesday, March19, Union President George Gresham,1199SEIU Healthcare Workers and thousands of activists drove up to Albany from New York City to protest the budget cuts to Medicare. They gathered at the Empire State Plaza and rallied “To ensure [that the] legislative budget restores all healthcare cuts.”

In a statement sent to the Amsterdam News, 1199 added that their action was to ensure that “cuts to the Medicaid budget, proposed in the governor’s 30-day amendments, will be restored in the final budget document, which is due March 31…  The members work in hospitals nursing homes and in their clients’ own homes. They know the real consequences of healthcare funding shortfalls and the direct impact on patient care.”

The 400,000-member strong United Healthcare Workers East noted, “In February, the 2019-2020 Executive Budget proposal was amended to cut $550 million in Medicaid funding proposed in the state’s 2019-2020 fiscal budget. Due to federal matching funds that support Medicaid, the health care industry is projecting a total loss of $1.1 billion. This funding shortage would devastate the ability of health care workers at hospitals, health systems and nursing homes to provide quality services to their patients and communities.

“Rescinding the cuts in the state budget is crucial because the Trump administration has proposed a sharp slowdown in Medicaid and Medicare spending as part of a broad reduction in the government’s investment in health care.”

Other areas that would see major cuts include an $8.5 billion decrease to Department of Education for 21 Century Community Learning Centers and carry-over Pell Grant funding. According to the, Postsecondary National Policy Institute 72 percent of African-American students received Pell Grants in 2015-16, compared with 34 percent of white students. The average award for African-American students was $4,900.

“On education, this budget would slash funding for an array of programs that help low-income students afford college,” said Association of Public and Land-grant Universities (APLU) President Peter McPherson. “The U.S. should be looking for ways to expand college access, not shrinking programs that enable such opportunities. A college education should be equally available to students from all backgrounds regardless of their family income.”

Assemblyman Charles Barron warned, “We have to be more vigilant, more bold and more intentional in bettering the lives of the people of this state when it comes to New York’s multibillion dollar budget. I, for one, can never vote for a budget that extends mayoral control. Mayoral control has been a dismal failure to the 1.1 million New York City children. We must rise up and ‘Seize the Times.’

“The good news is that the people are challenging the proposed drastic cuts, and are simply refusing to accept business as usual in this state.”