Upsets, heartbreak and the favorites emerging await the Big Dance 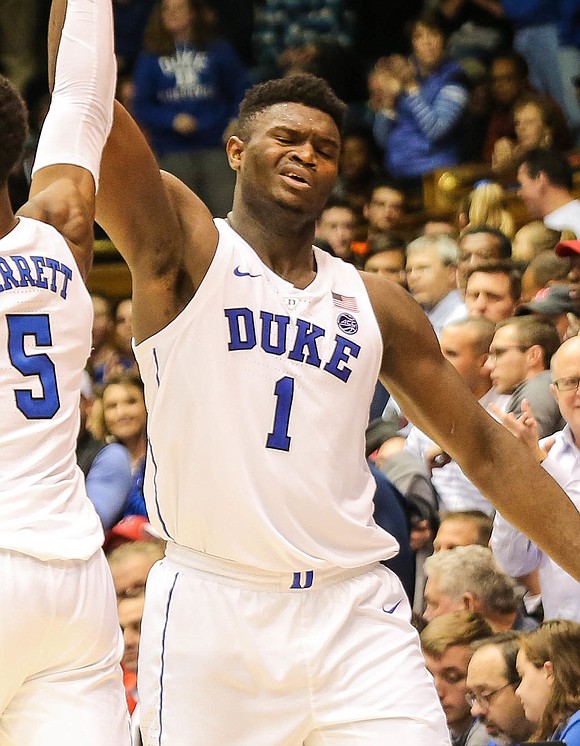 Duke’s Zion Williamson is seeking to lead the Blue Devils to the program’s sixth NCAA title.

Widely known as The Big Dance, the NCAA Division I Men’s Basketball Tournament begins in earnest today, although the four schools that officially kicked it off Tuesday night, followed by another four collegiate programs taking the court last night (Wednesday) would beg to differ.

Local teams and two HBCU representatives were part of the tournament’s opening as Farleigh Dickinson University defeated SWAC champion Prairie View A&M 82-76 Tuesday, while last night North Carolina Central of the MEAC faced North Dakota State and St. John’s, playing its first game in the tournament since 2015, met up with Arizona State with the winner moving on to a match up with the University of Buffalo tomorrow afternoon.

Seton Hall, who lost to Villanova in the Big East championship game last Saturday at Madison Square Garden will challenge Wofford tonight (8:40 p.m.) and Iona has the daunting task of upending North Carolina, who has all the necessities to win the school’s seventh men’s basketball title, the most recent coming two years ago.

But it is the Tar Heels’ longtime Atlantic Coast Conference rival, Duke, that is the overwhelming favorite to capture its sixth championship. The 29-5 Blue Devils are the largest favorite since Kentucky came into March Madness undefeated in 2015, ultimately losing in the Final Four. The primary source of their lofty status is 18-year-old Zion Williamson, one of the most dominant college basketball players in the past 20 years.

The 6” 7’, 285 pound man-child holds the rare distinction of being the ACC Rookie of the Year, Player of the Year, conference tournament MVP and First Team All-American. He will also be the No.1 overall pick in June’s NBA Draft. But more than the individual accolades, Williamson desires to be an NCAA champion and join men such as Bill Russell, Kareem Abdul-Jabbar, Magic Johnson and Anthony Davis who have ended their college careers as champions.

Their path will be perilous—which is the nature of the lose and you’re out event—as they are situated in the East Region with a possible regional final clash with Big Ten champion Michigan State. The other No. 1 seeds, North Carolina, Virginia and Gonzaga, all three who faced Duke a total of five times this season, are confident they can be the team cutting down the nets April 8 at US Bank Stadium in Minneapolis, where the Final Four will be held.

Michigan, Houston, Texas Tech, Kentucky, Florida State and Tennessee are among the programs flush with talent and could wind up as the last team standing. Before then, they could as easily be victims of upsets by much lower seeds. The pick here is that North Carolina and Duke will meet for the fourth time this season with the Tar Heels getting the victory.